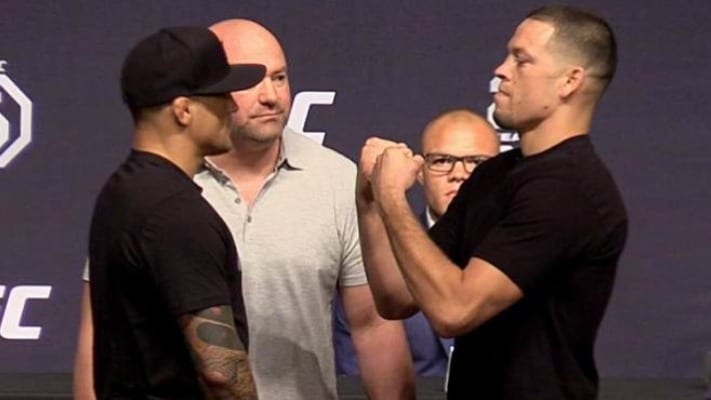 Last year, Dustin Poirier and Nate Diaz were briefly scheduled to fight at UFC 230 from Madison Square Garden. However, the bout was never put into a main event slot. It was instead slated as the co-main event.

This upset Diaz, who didn’t want to jerk the curtain for a lesser name. While the fight was never officially called off for that reason, it was scrapped after Poirier was forced to pull out with a hip injury that needed surgery to repair. Over the past several months, Diaz and Poirier have gone back-and-forth over why the fight was truly called off.

Poirier took to Twitter today (Mon. October 28, 2019) and was asked about the issue by fans. “The Diamond” took the opportunity to reveal the “whole truth” as to why the fight never happened.

“He wanted it he just couldn’t come to terms with ufc. They offered us the main event at msg but he would only agree if it was on his terms. I was tired of playing games with the guy and that’s when i decided to address a injury I had been dealing with. Now you all know.”

“And thats the whole truth with me and Nate situation ….also I jumped the gun when news came out that he failed a test. He’s always been a guy who pushed for clean eating and clean sport. I shouldn’t have. Doesn’t change the fact that I still want to beat his ass.”

One fan suggested that UFC president Dana White was never going to give Diaz the main event slot for the MSG card. But Poirier believes otherwise.

Poirier went on to fight for the UFC lightweight title in a losing effort against Khabib Nurmagomedov in Abu Dhabi. As for Diaz, he’ll main event UFC 244 on pay-per-view (PPV) against Jorge Masvidal this weekend (Sat. November 2, 2019) from Madison Square Garden. The pair will compete for the Baddest Mother F*cker Championship.

What do you think about Poirier’s explanation for why his fight with Diaz didn’t happen?