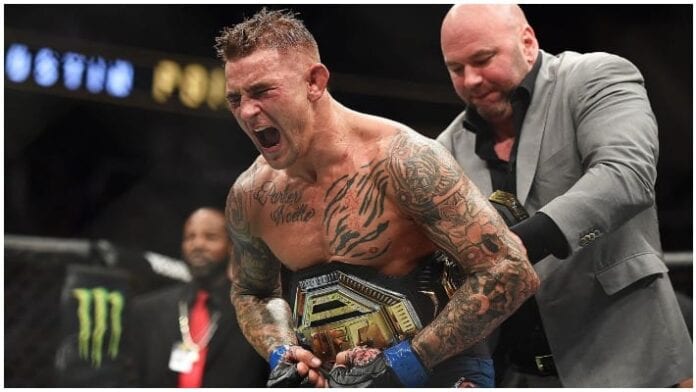 Former interim lightweight champion Dustin Poirier is hopeful that he will get another shot at becoming the undisputed king at 155lbs when he squares off against Conor McGregor at UFC 257 on January 23.

Long-time champ Khabib Nurmagomedov shocked the world last month when he announced his retirement from the sport after quickly beating Justin Gaethje at UFC 254. Since then UFC president Dana White has insisted the undefeated Russian will return to fighting, while ‘The Eagle’ has doubled down on his retirement plans.

‘The Diamond’ who failed in his bid to unify the division against Nurmagomedov last year believes his former opponent is a man of his word and therefore will never fight again.

‘The division has to move on,” Poirier told MMA Junkie. “The only thing that makes me think this guy is serious. First of all, he doesn’t seem like a bullshitter. And if he said he is done right after the fight, his father just passed and it is an emotional moment, you just got another title defense, you get to go back home to your family. You might say those things right after, but if a month later you are singing the same tune, maybe the guy’s mind is somewhere else.”

“I think if Khabib is really retired and not coming back, I am next in line for the title shot,” Poirier added.  This could be for the undisputed belt, that makes sense. But we will see what happens. Dana said one thing, Khabib is saying another. Time will tell.”

Poirier previously won the interim lightweight title by beating Max Holloway at UFC 236 explained why he has no interest in competing for a secondary belt again at UFC 257.

“I want the undisputed belt,” Poirier said. “In this situation, with him (Khabib) just defending, an interim belt doesn’t make a whole lot of sense. Like Dana said, hopefully, he gets some clarity and move the division on. You never know, me and Conor may be a title fight.” (Transcribed by Essentially Sports)

Do you think Dustin Poirier vs. Conor McGregor II will before for the undisputed lightweight title?