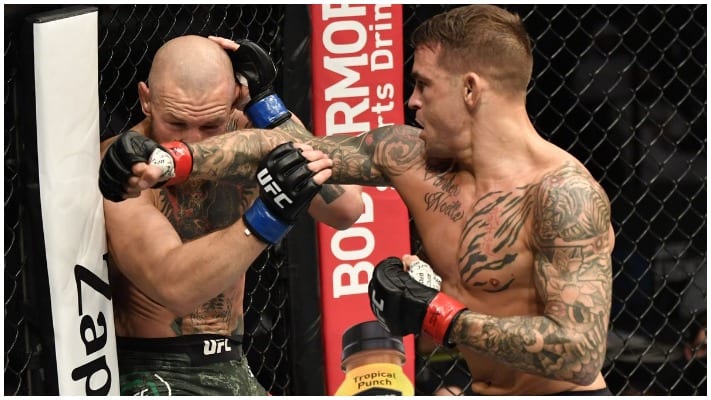 The former interim lightweight champion emphatically avenged his brutal loss to McGregor from 2014. Poirier wrestled early before going to work with calf kicks. Those kicks seriously damaged McGregor who was unable to avoid Poirier’s boxing strikes and he ultimately succumbed to a barrage of punches.

Speaking in the Octagon immediately after the fight Poirier declared himself the UFC lightweight champion despite the fact Khabib Nurmagomedov officially still holds the belt.

‘The Diamond’ reiterated that message while speaking to media at the UFC 257 post-fight press conference, he said.

“I lost to Khabib. I came out and put on a Fight of the Year for you guys. I got my hand raised against a top five opponent after that. Then I come in here and Khabib doesn’t wanna come back. One of the biggest fights you can get, I knock this guy out too. Khabib reiterates he doesn’t want to fight anymore. Dude, I’m the champ.”

Poirier wasn’t done with his champ talk and took to social media to remind everyone he is the uncrowned UFC lightweight champion.

Do you think Dustin Poirier should be considered the UFC lightweight champion?