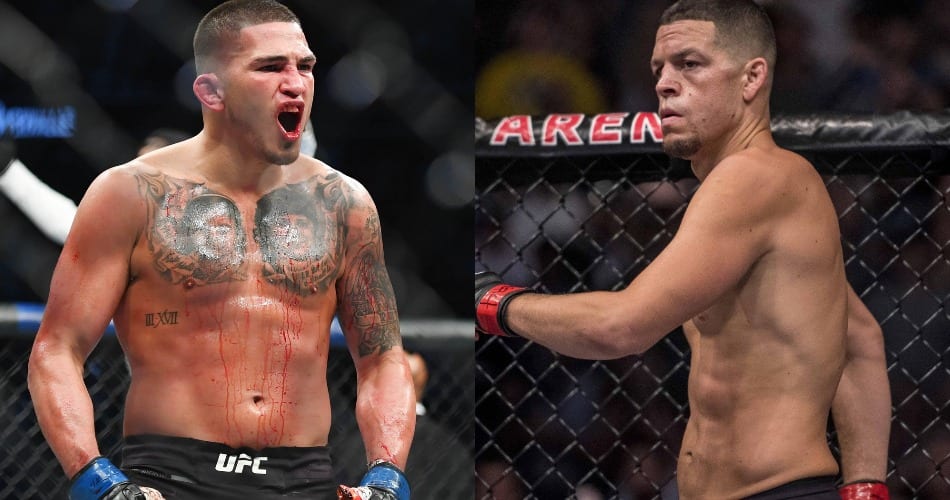 Nate Diaz is finally set to return to the Octagon.

The Stockton native hasn’t fought since his 2016 rematch with Conor McGregor. After several failed attempts to lure the fan-favorite back to the Octagon, it looks like Diaz might actually make the walk after three years away. He’ll be facing former 155-pound champion Anthony “Showtime” Pettis at welterweight.

All the action goes down at UFC 241 on pay-per-view (PPV) from the Honda Center in Anaheim, California on August 17. Speaking to Luke Thomas on “The MMA Hour” recently, Pettis’ coach, Duke Roufus, broke down “Showtime’s” key to victory over Diaz.

Roufus wants Pettis to take a similar approach to the last man who finished Diaz in the UFC, Josh Thomson (via MMA Fighting):

“I think it’s great for both guys,” Roufus said. “I’m being a little goofy with my metaphors, et cetera, but Nate Diaz is a beast, and he’s going to be a beast at 170.

“But I’ve found Anthony is really strong [at 170]. One thing I know from being a coach in this sport, I see these guys have incredible performances in the gym at their normal weight, and that’s what I’m trying to get a lot of my guys to dial into, being at the weight that they perform the best at in the gym.

“So that being said, it’s going to be a great fight. Stylistically, Nate is an incredible boxer, tough as nails, resilient, got the heart of a champion and incredible jiu-jitsu. I just think Anthony brings more tools to the fight.

“Ironically, a lot of people don’t realize, one of my longtime students … was the coach of Josh Thomson, who helped manufacture that win over Nate Diaz. So that goes back to old-school Roufus gameplan.”

Diving in a bit further, Roufus believes that playing the “up-down game” with kicks could lead to a knockout victory for Pettis as well:

“The up-down game,” Roufus said. “Getting him worried about the low kicks then going high, going to the body, et cetera. The thing is, kicking defense is one of those things you just don’t pick up in a training camp, and that’s what we just saw this weekend — two fights that were strongly effected by the low kick.

“”Anderson Silva, and then as well, another fight was Michael ‘Venom’ Page got off-balance with a low kick and then knocked out by (Douglas) Lima. That’s why I was so confident coming into the ‘Wonderboy’ fight. You don’t always see the effects right away of the low kick, but they throw incredible fighters’ timing off.

“People who have the ability to kick all targets are very hard to beat, and that’s something that Anthony has embraced recently, especially when we don’t fight wrestlers, it’s a lot easier to kick more. It becomes truly a kickboxing fight.”