LowKickMMA.com
Home MMA News Dolce: Holm Is Undefeated, She Deserves To Be In The Title Picture 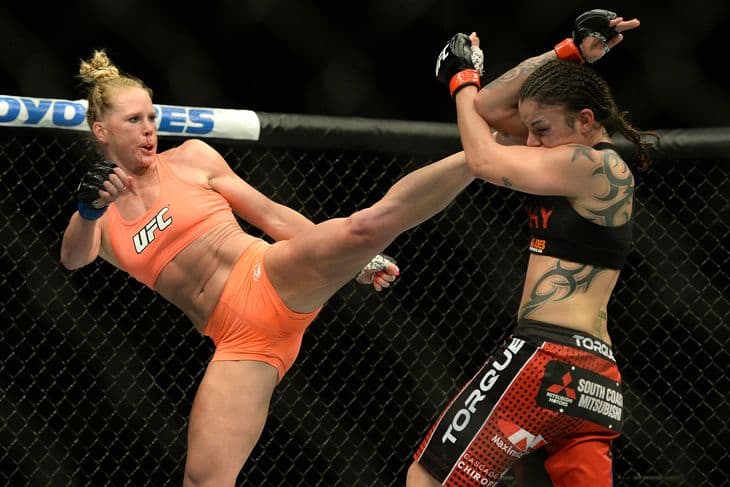 Fans were quite shocked when it was recently announced that undefeated former pro boxing champion Holly “The Preacher’s Daughter” Holm would meet dominant women’s bantamweight champion “Rowdy” Ronda Rousey at UFC 195 on January 2, 2015 for the title.

So why were fans, as well as media members shocked? Well, that’s because UFC president Dana White once again went back on his word, as he had previously “confirmed” that No. 1-ranked Miesha “Cup Cake” Tate would be getting the next title shot.

Now, Tate has lost to Rousey twice, but she has also rattled off four-straight wins since her last loss to the “Rowdy” one. Also, despite her decorated striking background, and her successful mixed martial arts (MMA) career thus far, many believe that Holm may not be ready for Rousey just yet.

Since entering the UFC, “The Preacher’s Daughter” has won two-straight decisions over Raquel Pennington, which was a split-decision, and Marion Reneau, which was a unanimous decision.

Although many fans may not think that Holm is ready, Rousey has said that the former boxer will be her toughest test to date, and obviously the best striker she’s ever faced. Rousey’s nutritionist, or weight management coach, Mike Dolce also talked on the topic, saying that it’s a more competitive fight than many believe.

The famed nutrition coach stated that he believes that Tate is the No. 1-contender, but he sees why the UFC went with Holm, also stating that Holm deserves to be in the title picture:

“It’s a much more competitive fight than people would say,” Dolce told MMAjunkie on Friday. “I see her getting bashed on the Internet. Who do you bash this young lady? Because she’s worked her tail off to get where she’s at.

“She’s undefeated. She certainly deserves to be in the (title-picture) conversation. Now, to jump over Miesha for the title shot? That’s a conversation. I think Miesha deserved to be the No. 1 contender or at least in that conversation. But having two cracks at Ronda already, I can see why Miesha was taken out of the equation and Holly was put in.”

Is Dolce just trying to promote the fight, or does Holm stand a chance with the destructive Rousey