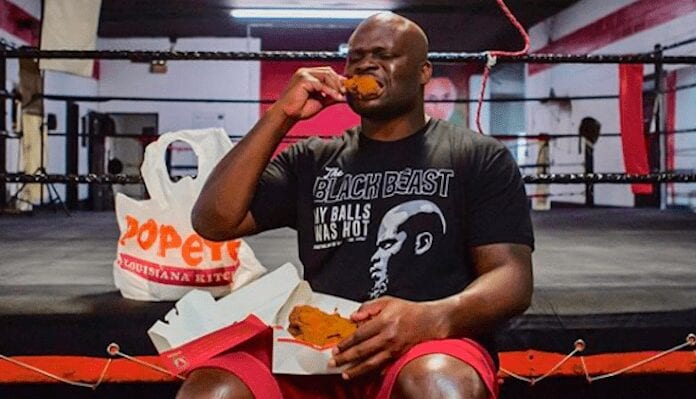 Two months later, and Derrick Lewis is still yet to cash in free Popeyes Chicken for life in his hometown of Houston, Texas, which he earned prior to UFC 230.

It was either brilliant marketing or a case of dumb luck for Lewis who earned free chicken for life for defending Popeyes honor. Still, two months later and “The Black Beast” is yet to cash in on his culinary reward.

The funny thing is the location that Lewis is referring to is only a mile-and-a-half away from his home. It’s not that Lewis hasn’t eaten his favorite fried chicken chain since his loss to Daniel Cormier at UFC 230. He has, but for some reason his wife paid for it:

Maybe Lewis isn’t in such a joking mood following his one-sided loss to Cormier at UFC 230. He may not be looking to get free chicken, but he is looking to get back on track in the Octagon.

“The Black Beast” will return to action on March 9 as he will headline UFC on ESPN+ 4 against former heavyweight champion Junior Dos Santos.