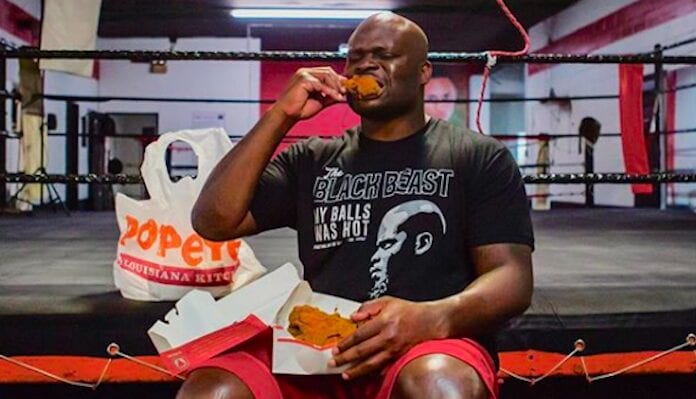 In an absolutely brilliant marketing move, Derrick “The Black Beast” Lewis will receive free Popeyes Chicken for life for defending the chicken chain.

Lewis himself admitted he may not be the most deserving contender for “DC’s” title. However, he has gone a staggering 9-1 in his last 10 fights in the UFC, in the heavyweight division none the less.

The proud Houstonian was already one of the more exciting fighters on the UFC’s roster. But after his come-from-behind knock out victory over Alexander Volkov at UFC 229 Lewis’ popularity exploded.

Partly because of his performance during the fight and partly because of what Lewis would say to Joe Rogan in his post-fight interview- “My balls was hot,” the four words that changed the course of the heavyweight division.

UFC 230 won’t be the first time Cormier and Lewis have been in the same room as each other. Not long ago the two were involved in a backstage incident. Not of the violent type, you often hear about in MMA. This was much more light-hearted.

Lewis jokingly blasted “DC” for disrespecting the famous Southern Chicken chain. His defense of Popeyes looks as if it’s going to pay off for Lewis in a big way.

“Adding another layer to the fast-food war brewing heading into the UFC 230, Derrick Lewis’ manager Malki Kawa tells me Popeyes Chicken took notice of [Derrick Lewis] defending its honor and have struck a deal with him heading into this weekend’s fight. Details to come,” Ariel Helwani Tweeted on Wednesday.

Adding another layer to the fast-food war brewing heading into UFC 230, Derrick Lewis’ manager @malkikawa tells me @PopeyesChicken took notice of @Thebeast_ufc defending its honor and have struck a deal with him heading into this weekend’s fight. Details to come.

Lewis’ manager, Malki Kawa, further clarified his tweet. Saying that “The Black Beast” will be given free Popeyes’ chicken in the Houston area. He will also be featured on Popeyes menu boards, while Popeyes corporate offices are likely to sweeten the pot as well.

Lmao, Popeyes in Houston just called and gave @Thebeast_ufc free Popeyes for life and Derrick will be on the menu board, in addition to what corporate is doing. Let’s go d! #popeyes

Lewis took to Instagram just about the same time this news broke. As always, he didn’t miss his chance to capitalize on a brilliant marketing opportunity. Lewis can be seen taking a huge bite of some tasty looking chicken all while sporting his new “My balls is hot’ shirts. You can buy one here.

As an extra bonus, a video of Lewis’s fried chicken fueled work out surfaced online today. Its a must watch.

He just put out something on IG with Popeyes in it.

Fried chicken and all, Lewis will have his chance to capture the heavyweight title of the world at UFC 230.