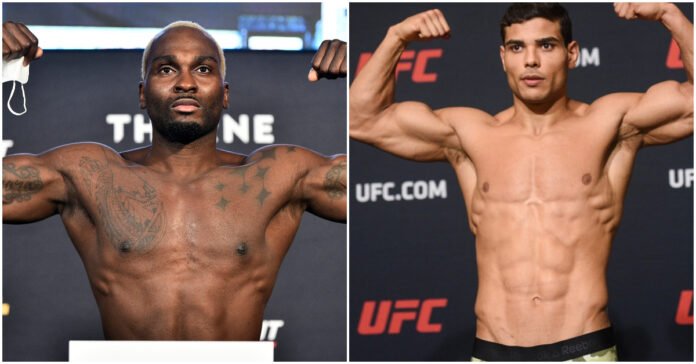 UFC Middleweight fighter Derek Brunson trolled Paulo Costa by labeling him as a ‘heavyweight’ and asking him to stay in his weight class after Costa called him out.

Brunson claimed to have asked for a fight against ‘Borrachinha’ on numerous occasions but to no avail. He mocked the Brazilian’s failed attempts to make weight in his last fight against Marvin Vettori and said that he’s waiting for Costa’s second heavyweight bout. Brunson indicated that he won’t likely be fighting anytime soon as he’s working on his craft before finishing the tweet with more ridicule for Paulo ‘Pasta’.

After a match-up with Sean Strickland fell through, Paulo Costa took to Twitter to target a fight with Derek Brunson as all three are currently ranked #4 in the UFC Middleweight rankings.

Costa lost his most recent fight with Marvin Vettori and is on a two-fight losing streak having been soundly beaten by the middleweight champion Israel Adesanya before that. Derek Brunson is coming off a loss against Jared Cannonier.

While there have been no official statements made, Sean Strickland claimed that the fight against Paulo Costa fell through as the UFC was not interested in it. Costa has had problems making weight in the middleweight division and Strickland’s claims of UFC being uncertain about the Brazilian’s future in the organization adds more mystery to what will happen next.

Will Derek Brunson beat Paulo Costa in a potential fight?