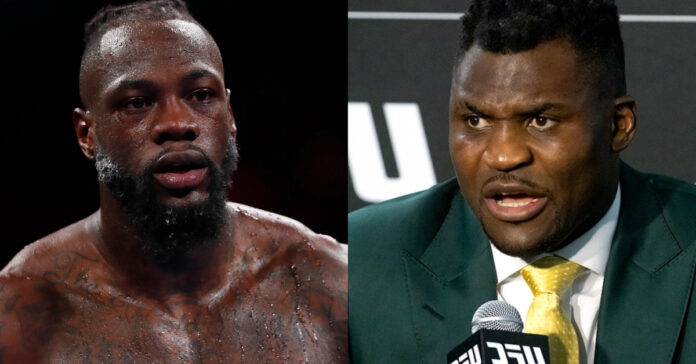 Deontay Wilder talked about training with Francis Ngannou and the idea of facing him inside the ring one day.

UFC heavyweight champion Ngannou has been on the sidelines since his last outing against former interim title holder Ciryl Gane in Jan. at UFC 270. “The Predator” went into the bout with a torn MCL and damaged ACL that he suffered in training. Ngannou unified the heavyweight titles and handed Gane the first professional loss of his career using a surprisingly grappling-heavy gameplan.

Deontay Wilder trained with Francis Ngannou at the UFC Apex

In a video shared by The Mac Life on YouTube, Deontay Wilder shared that he got the chance to get a workout in with Ngannou while training at the UFC Apex in Las Vegas, Nevada.

“Yeah, for sure (I ran into him before),” Wilder said. “He’s been in this area, in this gym before. Me and him training together so all love.”

Wilder is set to mark his return to action against Robert Helenius on Oct. 15 at Barclays Center in Brooklyn, New York. Coming off two consecutive losses, including his first ever defeat, Wilder will look to get back to winning ways after a year-long hiatus.

Wilder commented on a potential outing with Ngannou

Ngannou has been rallying for a shot at former boxing champion Tyson Fury. However, he needs the green light from the UFC, who are not too keen on the idea. Ngannou is adamant that he will not re-sign with the promotion if they don’t let him box but no concrete developments have come as of yet.

When asked about potentially competing against Ngannou, Wilder did not rule out the possibility.

“Maybe one day who knows the future is bright. Oct. 15 right now is what we are focused on the most. But hey man, a lot of things are in the works for the future.”