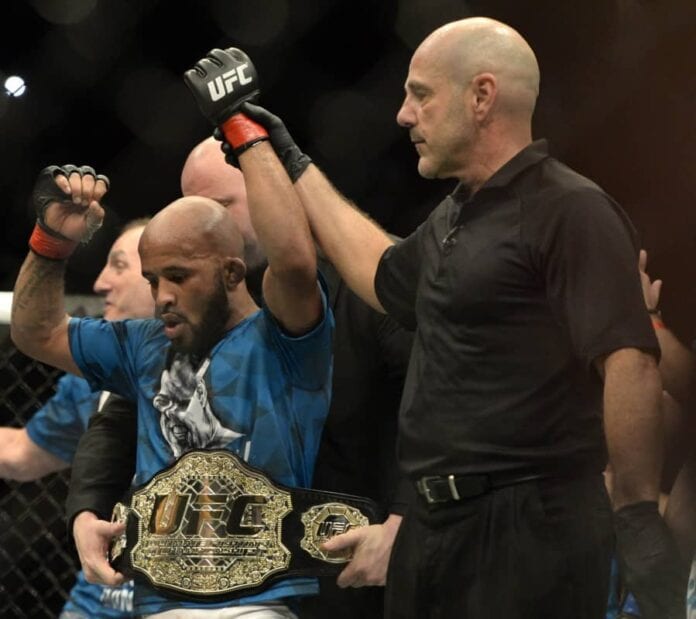 “Mighty Mouse” got hold of the leg of Dodson, but let go. The two quickly broke free of the clinch. Johnson popped the challenger with two right hands. “The Magician” was able to defend another takedown, but Johnson’s constant pressure set the tone for the rest of the fight.

A leg kick landed early in the second frame for “Mighty Mouse.” Dodson caught Johnson’s kick and took him down. The champion quickly stood back up. “The Magician’s” knee was caught and Johnson looked for a takedown. Johnson settled for a knee to the body. Dodson tried to outmuscle Johnson in the clinch, but they separated. Johnson landed some knees in the clinch, but Dodson reversed and got in some knees of his own. The round came to a close with Dodson blocking a high kick.

Round three began and the two fighters rushed to the center of the Octagon. Johnson landed some punches, while grabbing onto his opponent’s leg. “Mighty Mouse” popped “The Magician” with some quick right hands. Blood started to show on the nose of Dodson, who still had not been taken down.

Johnson made his opponent pay for his takedown defense with elbows. Dodson kicked Johnson low, but the champion told referee Herb Dean to get out of the way and the fight was uninterrupted. With just under a minute left in the round, Johnson took Dodson down. The round ended with Johnson attempting a flying knee.

Johnson landed an uppercut and a hard right hand to back Dodson against the fence. “Mighty Mouse” looked as fresh as he did in the first round and you can say that about pretty much all of his fights. Johnson showed great defense, avoiding the challenger’s punches effortlessly. The champion snuck in another right hand. Johnson caught Dodson with a right hand as the challenger was backing up. Round four ended and Dodson looked winded.

With the final round underway, Johnson tagged Dodson with a right hand. Dodson looked for kicks to the body. They engaged in the clinch with Johnson landing a knee to the solar plexus. “Mighty Mouse” secured a big takedown with a little over three minutes to go in the fight. A stiff right hand connected for the champion as Dodson walked in.

As the final horn sounded, the decision was academic.