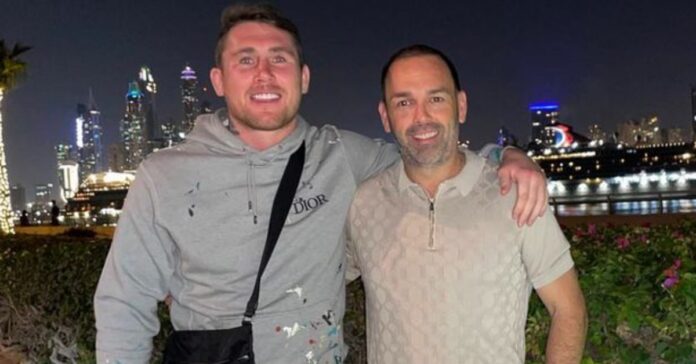 UFC middleweight contender, Darren Till has recently shared a picture of himself alongside reputed Irish cartel leader, Daniel Kinahan, after a walk on the beach, describing the Dubliner as a “good pal” of his.

Till, who is currently training in Dubai amid his most recent Octagon appearance which came in the form of a third-round rear-naked choke loss to Derek Brunson in September, shared a snap alongside Kinahan, with the two smiling following a walk on a Dubai beach.

Kinahan, 44, has been named as a senior figure in organised crime in the High Court of Ireland and is the reputed leader of the Kinahan Organised Crime Group, which specialises in drug and arms smuggling into Ireland, mainland Europe, and the United Kingdom.

The Kinahan Cartel or Organised Crime Group has been involved in a lengthy, ongoing feud with another Irish criminal organization, the Hutch gang, which has resulted in 18 deaths since September 2015 and more than 60 reported arrests.

The feud began in 2015 when Gary Hutch was murdered in Marbella, Spain, with An Garda Siochana seizing a reported 456 firearms, €64 million worth of drugs and a further €2.2 million in cash.

Kinahan was the target of a failed assassination attempt back in 2016 at a boxing weigh-in event at the Regency Hotel in Whitehall county, Dublin, which resulted in the murder of David Byrne. It is believed the attack was to carry out revenge for the murder of Hutch, with Kinahan the intended target.

In 2012, Kinahan, along with Irish boxer, Matthew Macklin founded MTK Global, before the organization reportedly cut ties with Kinahan in February 2017. Kinahan was, however, credited by WBC heavyweight boxing champion, Tyson Fury for brokering a two-fight deal for a proposed fight with Anthony Joshua back in 2020.

MTK Global currently represent a slew of professional mixed martial arts fighters including the aforenoted UFC middleweight, Till since December 2017, as well as other UFC fighters including Aleksandar Rakic, Taila Santos, Mounir Lazzezz, Sumudarji, and Josiane Nunes to name a few.

Despite confirming they had cut ties with Kinahan back in 2017, the organization have admitted that the Dubliner still provides “personal advice” and “advisory services” to fighters under the organization’s banner, as well as other “world boxing management companies” scrutiny.

“It is true that Mr. (Daniel) Kinahan provides some personal advice to a number of boxers managed by MTK Global and we are instructed that Mr. Kinahan also provides services to boxers who are managed by other worldwide boxing management companies too.”

Earlier this month, Darren Till took to his official Instagram account where he reflected on a nine-year incident in which he was stabbed twice in a Liverpool nightclub, campaigning for an end to knife crime in his native Liverpool and the United Kingdom, as well as urging young people to join gyms across the country.

Do you think Darren Till is sending mixed messages about his thoughts on violent crime after campaigning against knife crime while getting chummy with a reputed cartel boss?