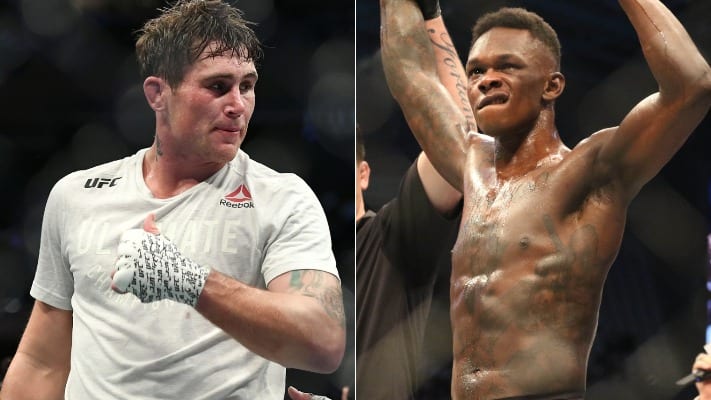 While sidelined from his originally scheduled UFC Vegas 16 headliner opposite Jack ‘The Joker’ Hermansson on December 5 – popular middleweight contender, Darren ‘The Gorilla’ Till has questioned if division champion, Israel ‘The Last Stylebender’ Adesanya has the sufficient arsenal to overcome arch-rival, Jon ‘Bones’ Jones.

Till, who was initially slated to headline the UFC Apex facility event against the Swedish born grappler, Hermansson, was forced to withdraw entirely from the card recently, as he continues to deal with an ACL injury which he suffered in his close UFC Fight Island 3 defeat to former champion, Robert ‘The Reaper’ Whittaker.

In the Liverpudlian’s place steps the always-active, Kevin ‘The Trailblazer’ Holland – who attempts to lodge his own name into title contention territory with a short-notice win over recent winner, Hermansson.

Counter-striker, Till, who is 1-1 at 185-pounds since his leap from welterweight back at UFC 244 in November of last year in an uneventful judging win over Kelvin Gastelum, recently touched on a potential pairing of Adesanya and Jones, as the former prepares for an expected climb to the light heavyweight ranks in pursuit of Jan Blachowicz’s 205-pound crown.

“Izzy (Israel Adesanya) can do whatever the f*ck he wants,” Till said to ESPN MMA reporter, Ariel Helwani. “He’s the champion. He’s beat the best in the division, apart from me. I am the best. But he can do what he wants. He can move up, he can do down. He can go and suck farts out of Dana’s (White’s) arse for all I care. I don’t care Ariel (Helwani). Let Izzy do what he’s gonna do.“

When asked if he believes Adesanya could claim the light heavyweight throne in a tentatively targeted pairing with Blachowicz in early 2021, Till gave Adesanya a “one-hundred percent” chance.

“Yes,” Till replied when asked if Adesanya would win at 205-pounds. “One-hundred percent. I don’t think he beats Jon Jones, I don’t think he’s got the tools. It’s funny, man because one thing – I like Jon, I’m a fan of Jon Jones. One thing I think Jones done (sic) wrong recently was, sort of – he was tweeting while Khabib (Nurmagomedov) was winning and he was like, ‘I’m the G.O.A.T.’. I know obviously what his thoughts are but I think he should’ve left it.“

Till maintained, however, that when presented with the opportunity to stand opposite, Adesanya – that he would spring a win against the undefeated City Kickboxing ace.

Do you agree with Darren Till? Will Israel Adesanya come up short if/when he squares off against Jon Jones?