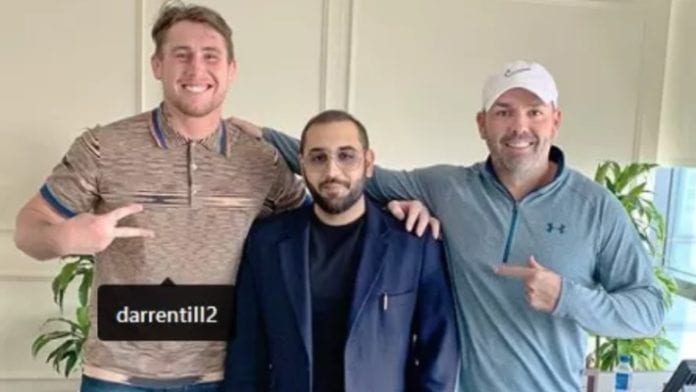 Darren Till recently made headlines when a picture did the rounds showing him posing alongside alleged Kinahan Cartel leader Daniel Kinahan.

Till is managed by MTK Global which was initially co-founded by Kinahan. Following their rebrand in 2017, the company later announced that it severed ties with Kinahan.

However, many remain doubtful as to whether that is the case and Kinahan’s involvement was made more evident when he recently posed alongside Till and MTK’s Bahrain brand ambassador Mohamed Bin Mansoor Al Arayedh.

News media quickly picked up the story that Till had ties with Kinahan. But rather than deny it, “The Gorilla” admitted he had a friendship with Kinahan as he blasted the media for making a news story out of it.

“Yes I am friends with Daniel Kinahan… & what? I’ve never hidden his friendship & why should I when the man has given me more valuable advice as a friend than anyone I’ve ever met in a professional capacity. I’ve been friend with Dan for years & years long before I ever joined MTK Global so why would it automatically be presumed the two are linked.

“There are thousands of people dying all over the world right now, people losing they’re jobs & struggling to keep a roof over their heads & put food on the table & this is NEWS?!! These journalists who are harassing me right now for a statement & writing lies & hated in an effort to make this news need to take a long hard look at themselves & ask what they are really contributing to the world. I won’t be commenting on this sh*t anymore, instead I’ll focus on more important things! I.e keeping my loved ones safe! #TheSunLie #Slander #Rats”

Regardless of how Till feels about Kinahan, the latter’s father Christy is the alleged founder of the cartel which is reportedly the biggest supplier of illegal drugs in Ireland.

What do you make of Till’s response?