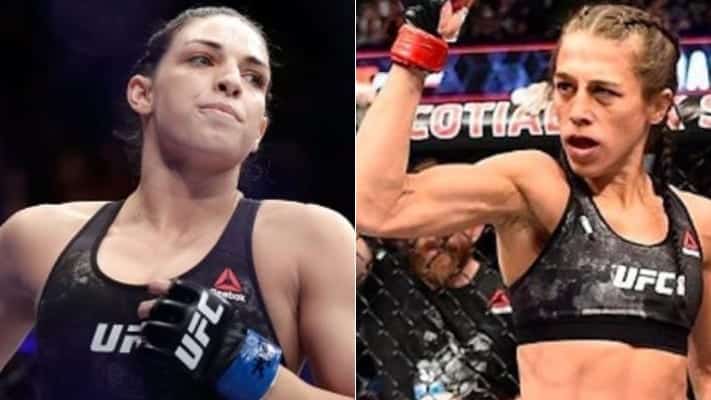 Daniel Cormier would like to see a title eliminator fight between Joanna Jedrzejczyk and Mackenzie Dern.

Dern is coming off an impressive first-round submission win over Nina Nunes at UFC Vegas 23 this past weekend. It put her on a four-fight winning streak while she will likely crack the top five of the women’s strawweight division soon.

Jedrzejczyk, meanwhile, hasn’t competed since her five-round war with Weili Zhang in March last year that saw the champion edge out a razor-thin split decision. She doesn’t seem eager to compete anytime soon either unless it’s for a fight that interests her or another title opportunity.

If Jedrzejczyk is willing to fight anyone next, however, Cormier would like to see her battle the ever-improving Dern in what would be a No. 1 contender fight for the 115-pound strap.

“If the former champ wants to fight, I would love to see (Dern) fight Joanna Jedrzejczyk because if she can win that fight, I don’t know if you can even question whether or not she should get a title fight if she beats Joanna Jedrzejczyk,” Cormier said on DC & Helwani (via MiddleEasy). “Mackenzie Dern has earned the right to fight the elite or the elite, and it’s because she is so in tune with who she is today, as a mother, as a wife, and just as an athlete…

“She’s so game on the feet, and once you’re on the ground with her, it’s like watching a Jiu-Jitsu tutorial. (Dominick Cruz) and I are watching the fight, and Mackenzie slides into the mount and immediately you’re like she’s going to go chase the armbar but she’s going to do it in a way where Nina Nunes doesn’t recognize that it’s coming, and that’s exactly what happened. Mackenzie Dern is truly something special, and it’s a joy to watch someone really mature into the athlete that people thought that she could become.”

It’s certainly an intriguing and fresh matchup. Whether Dern is ready for a former champion or whether Jedrzejczyk is interested in fighting her remains to be seen as of now.