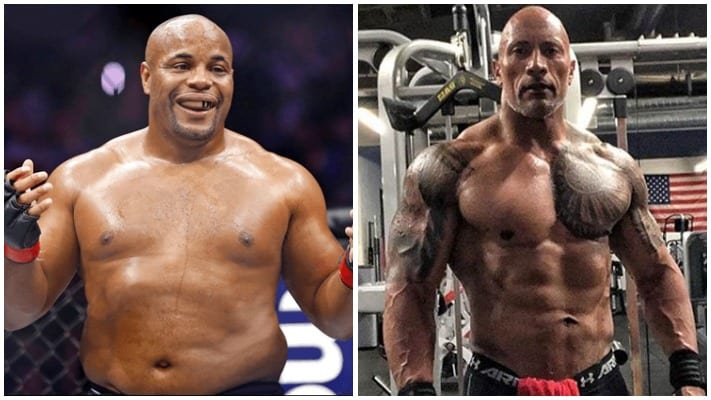 Cormier admits he has been struggling to keep the weight off during the lockdown. However, when an ESPN poster made him look podgy, Cormier intervened and asked for a bit more definition on be added which resulted in him looking like ‘The Rock’. Check out the poster below.

Speaking on the latest episode of ESPN’s “DC and Helwani”, the MMA reporter tells Cormier he is being roasted online for the poster, he says.

“Robert Pearson made us this amazing poster and you are getting killed for this poster because they all think that you made it and you made yourself look like The Rock. You have this nice slim figure, the neck, what’s going on with this poster?”

Cormier then went on to explain how the whole poster situation played out.

“Don’t hate,” Cormier said. “People are hatin’ because I look like Dwayne Johnson. It’s not my fault that there’s a very strong resemblance between me and The Rock.” (Transcribed by Heavy.com)

While not many fans seem to agree the only man who counts does. ‘The Rock’ took to social media to address the poster and his “twin” Cormier, he wrote.

“Maaan this gave me a good laugh. Me and my brother [Daniel Cormier] are pretty much identical twins. Get over it people. Sheeesh.”

What do you make of the poster of Daniel Cormier and Ariel Helwani?