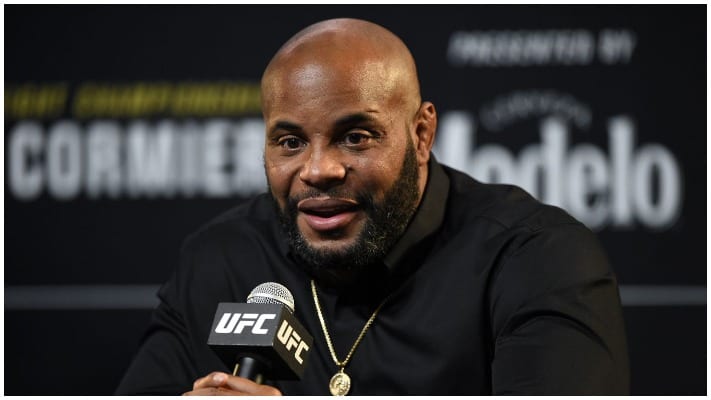 Daniel Cormier has revealed he will not be fighting boxing legend Mike Tyson.

‘Iron Mike’ returned to the ring after 15 years in retirement to face Roy Jones Jr. in an exhibition bout last month. The show was a great success. Not only did it garner 1.6 million pay-per-view buys, Tyson also looked very good and can count himself unlucky to have only emerged with a draw for his efforts.

Post-fight Tyson revealed his plan to fight on and keep competing as part of a Legends Only League. A list of potential opponents for Tyson’s next bout has been drafted up and shockingly the recently retired Daniel Cormier found his name amongst the likes of Evander Holyfield, Lennox Lews, and Tyson Fury.

Speaking on the latest episode of ‘DC & Helwani’ the former dual weight UFC champion ruled himself of a potential fight with Tyson after being ranked among the favourites to face the heavyweight legend next, he said.

“Why would they put me in a boxing match with Mike Tyson? … Nah, I ain’t fighting Tyson. I’m not fighting Mike Tyson.”

“I’m not afraid but I don’t know the rules under which we are playing… I was just in a fight four months ago, Cormier added. “I may have flashbacks, I may take Mike down, you don’t know what happens in that situation.” (Transcribed by Sportskeeda)

Cormier announced his retirement the sport after falling short in his highly anticipated trilogy fight against Stipe Miocic at UFC 252 back in August. Since then there has been talks about him joining the WWE and he even struck up a beef with professional wrestling legend Booker T. As of right now Cormier is continuing with his UFC commentary duties and staying relevant with his popular podcast.

Do you think Daniel Cormier could be competitive against Mike Tyson?