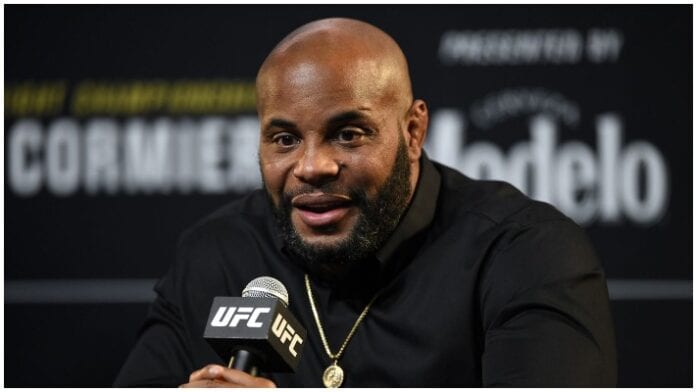 Daniel Cormier has finally responded to Conor McGregor who has been taking aim at the retired former dual-weight UFC champion over the past few days.

“I’m not the guy you’ve got to worry about fighting,” Cormier continued. “I’m done. I’m retired. I’m living my best life. You need to worry about trying to beat the guys that you fight against. Get off the internet. I don’t hate this dude, but McGregor, fall back.”

The beef seems to have stemmed from Cormier claiming McGregor’s recent social media outbursts are a “cry for help” but ‘DC’ insists he made the comment without ill intent.

“The reality is, McGregor is a high-level fighter, but when I said it was a cry for help, I did it with no ill intent,” Cormier said. “This was just me saying, find some people that are willing to step up and say, ‘Hey man, let’s get everything right.’ But the reality is, I don’t need to be friends with Conor McGregor. So I really don’t care what he says about me personally. I’m going to continue to do my job. And where he deserves praise, he’ll get praise. Where he deserves to be critiqued, he will get critiqued.

Cormier wants to remind everyone how the UFC 264 main event was playing out before McGregor suffered his unfortunate leg injury.

“All those kicks were landed in about in a minute. For the last four minutes of that round, it was Dustin Poirier beating up Conor McGregor,” Cormier said.  “Let’s not forget what happened in the fight. So let’s not get too distracted with all the other stuff.” (Transcribed by MMA Fighting)

Do you agree with Daniel Cormier? Should Conor McGregor be focusing on his recovery and return to fighting rather than beefing on social media?