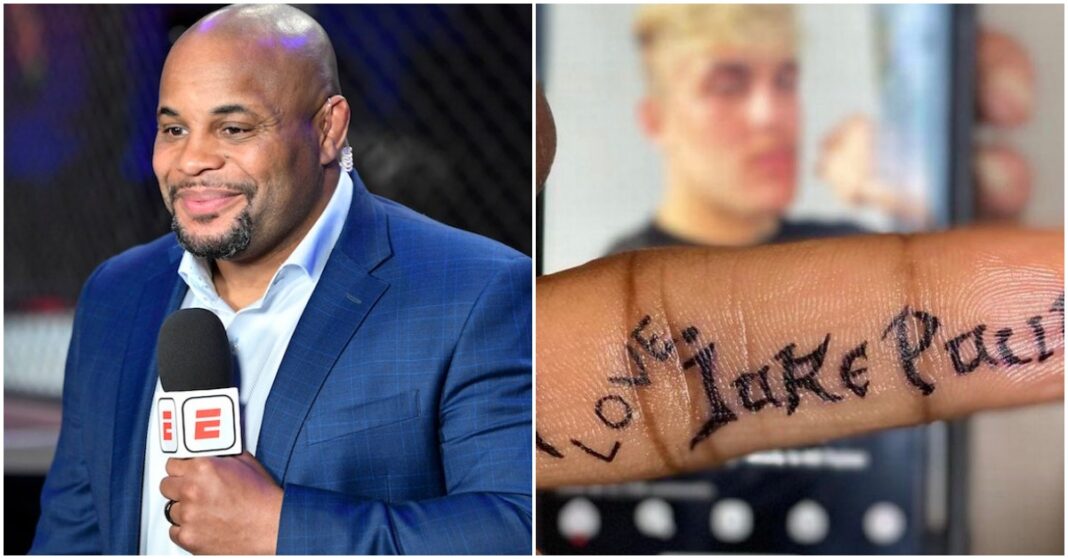 Tyron Woodley seemed to be forgotten about after his split decision loss to Jake Paul.

What made matters even worse was that Paul said he would give Woodley the rematch if he got the “I love Jake Paul” tattoo.

“The Chosen One” would follow through with his part of the deal and get the ink, but “The Problem Child” would backtrack and move on to a grudge match with Tommy Fury.

However, Fury has had to pull out of the bout with Paul through injury, Woodley is now stepping in meaning he has had the last laugh and the tattoo has proved to be the right decision

This is another opportunity for Woodley to secure a big payout post his UFC career, he has proved Daniel Cormier wrong who was one of the biggest personalities against the tattoo.

Speaking on his Youtube channel, Cormier said “I have been a number of things in my life, a lot of good things, a lot of bad things, but the one thing I am not is a hater”. At times, when this whole Tyron Woodley and Jake Paul thing was going on I may have come off as a bit of a hater because I didn’t want T-Wood to get the tattoo, I didn’t like the way the rematch was asked for, but guess what? It actually worked. And I’ve got to be honest, I can’t say I would be happier for anyone more than I am for Tyron right now, because he felt that he won the last fight and then, obviously he didn’t get the decision, and it felt like them kids were playing him.

“It felt like Jake Paul and his brother were gonna play Tyron, telling him he had to get a tattoo, Logan Paul saying, ‘Hey man, you had your chance.’ It felt like they were trying to play T-Wood, but honestly, Tyron did what he had to do, which even if you don’t agree with it, obviously there was some good favor with him getting the tattoo because otherwise they would’ve looked for someone else. I still have my same opinions on the tattoo but that don’t really matter right now because T-Wood gets the rematch….

“Everything’s out there for T-Wood. It’s out there for T-Wood to go and get it done right now and honestly, I couldn’t be happier for him. When a person has to go through what he went through, the ridicule from all his friends, family, everyone, all of us, people who he considered his friends for a long time were judging him harshly, saying he was foolish to do what he did. He stayed the course, he believed in himself, he believed in what could happen potentially for him, and now he finds himself right on the cusp of another massive payday.”

How will things be different for Tyron Woodley?

Woodley has been open in saying this fight would be the biggest payout of his career, with the former UFC champion having an added motivation of 500,000 from Paul if he can knock him out.

Their first bout was a very close encounter with Woodley having the most decisive moment of the fight when he nearly knocked the Disney channel star through the ropes.

But from then on Woodley didn’t come close again with inactivity being a theme in his last few fights.

DC would also add that “T-Wood has to just go fight. He hurt Jake Paul in the first fight and that is the one thing he has built his case for the rematch on. ‘I had you, the ropes saved you!’ But now you’ve got to actually go put it on the dude. You can not go and stand in front of him anymore. You felt what he had, you know that you can hurt him, it’s a matter of Tyron going out there and implementing his game plan.” (Transcribed by MMA Fighting)

Who do you think will win Jake Paul vs. Tyron Woodley II?