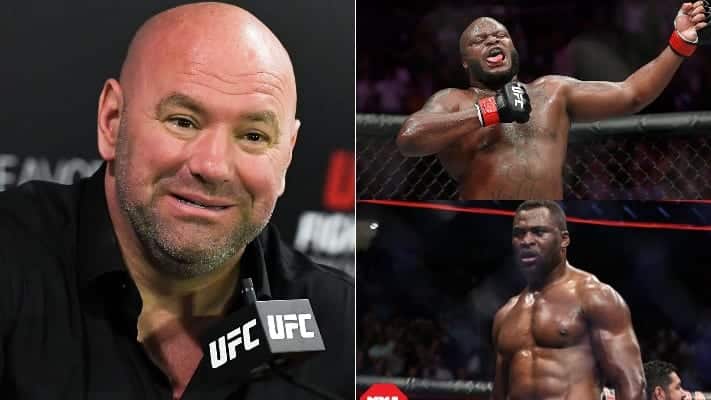 Things are moving along in the UFC heavyweight division, as Dana White confirmed the next title fight and hinted at another major matchup.

Heading into UFC 260, it was believed the winner of the Francis Ngannou-Stipe Miocic main event would welcome Jon Jones to the heavyweight division in their next fight. However, after Ngannou scored a second-round knockout, contract talks between Jones and the UFC stalled, leaving the champion’s next challenger up in the air.

In an interview with TSN, White provided some clarity in the division, confirming that the UFC is indeed going ahead with the rumored rematch between Ngannou and Derrick Lewis (H/T MMA Fighting).

“We’re working on that fight,” White said. “That fight is going to happen this summer.”

The first fight between Ngannou and ‘The Black Beast’ was one of the most anticipated matchups in recent memory. Not only did it fail to live up to the hype, but it ended up being borderline unwatchable. Lewis won what was essentially a 15-minute staring contest by virtue of landing 20 strikes to Ngannou’s 11. Since that fight, Ngannou has registered 5 consecutive knockouts, while Lewis has gone on to claim the all-time knockout record.

All hope is not yet lost for an eventual Jones move to heavyweight, however. Though the former light heavyweight king recently left his management team, there’s still ongoing talks between he and the UFC. White said UFC Chief Business Officer Hunter Campbell is going to continue talking to Jones about his move up and hopes to come to an agreement some time soon.

“Whether Jon has a manager or not, Jon is going to do what Jon wants to do.” White said. “So it’s probably something that Jon Jones needs to work out. I know that him and Hunter have a good relationship. So I think those guys are going to get together soon and talk.”

“Listen, you look as the last however many years and people ask me who I think the best ever is and I say Jon Jones,” White continued. “Jon Jones is a massive part of the history of this company. He’s one of the best ever. (No matter) where you stand, whether you think it is him, Anderson (Silva), Khabib (Nurmagomedov), GSP (Georges St-Pierre), wherever you stand on that, he’s one of the best of all-time. Obviously there is still some big fights that can be made with him, and we would love to do it. It’s not like we can’t get something done over here.”

Do you like these heavyweight fights Dana White is planning to make?