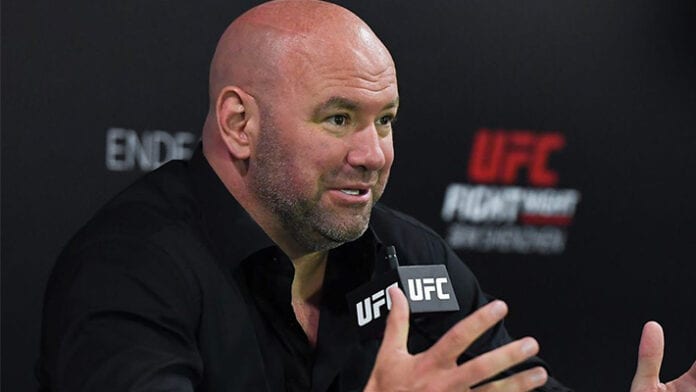 UFC president Dana White wants the organization to pull out all the bells and whistles for Conor McGregor’s return at UFC 257.

With McGregor officially signing his end of the bout agreement against Dustin Poirier, the UFC can start planning it’s build up to the fight. White’s idea is to have “Fight Island” play host to an International Fight Week event, and have multiple cards building up to UFC 257 and possibly even fans. He detailed his plan in an interview with Barstool Sports.

“I’m looking to make it International Fight Week. The new Etihad Arena will be open, and that thing was designed with us in mind. Concerts, pool parties, all kinds of cool stuff. And, yes, I hope to bring fans back. … That’s what I’m shooting for.”

White has been adamant about pushing through the coronavirus and hosting events during the pandemic. Since their May return from the COVID lockdown, the UFC has primarily operated weekly shows out of the APEX Gym in Las Vegas, and two separate five-weeks stints on Fight Island in Abu Dhabi. Having fans be able to attend a show featuring the UFC’s biggest draw in McGregor comes as no surprise. White is certain that the UFC would be able to pull it off safely.

“It would be good to have fans. And the thing is, from ‘Fight Island’ we can get fans all over the world there. It’s an easy destination to get to, a fun destination to go to, and we can just (expletive) blow the doors off this thing,” White said.

“I’m ready for some fights with fans. I’m ready to go to a live concert. I’m ready to have some parties. I’m gonna go to all this shit. I want to mingle with the fans again. I want the fans back. We’ve figured this whole thing out up to now. We’ll figure out how to do do this safely and pull this thing off in Abu Dhabi.”

International Fight Week has typically taken place in July. The UFC usually builds up a number of fight cards to go along with the UFC Hall of Fame induction ceremony as well as a fan convention, among other events. Max Holloway and Calvin Kattar are already scheduled to headline a card on January 16, one week before UFC 257. With hopes of having a full week of fights, don’t be surprised to see the UFC add another card between the two dates.

What do you think of Dana White’s plan to have fans attend International Fight Week?