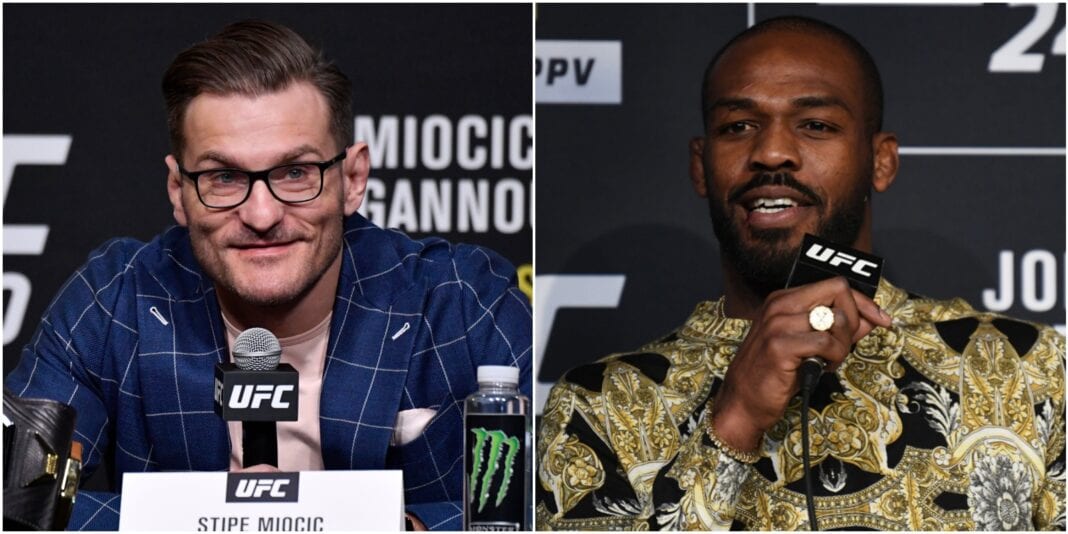 For what seemed like forever, former two-time UFC light heavyweight champion, Jon Jones has been linked with an immediate title challenge upon his much-speculated move to the heavyweight ranks. However, with the promotion currently working on a showcase between Francis Ngannou and Derrick Lewis, Dana White has suggested a clash of Jones and former champion, Stipe Miocic.

Miocic, a two-time heavyweight champion, headlined UFC 260 in March, dropping the championship to the above-mentioned, Ngannou in the form of a brutal second round knockout in the pair’s rematch.

Expected to sit out this summer as he and his partner welcome their second-born child, Miocic has recently explained how he hopes to score an eventual trilogy rubber match against Cameroonian bruiser, Ngannou upon his Octagon return — with plans to score another 20lbs of muscle before a possible third fight with the current champion.”I want to get back what’s mine,” Miocic said. “It’s bulking season. I’m gonna eat as much as I can and get big and strong… I’m trying to get to like, 250(lbs). I made 230(lbs) last time, not because I tried, but because of training. I’m really going to stick to really trying to gain a little bit of weight, a little bit more mass. I felt good but I think 20lbs will help. I will feel a lot stronger and he’s a big dude. (Laughs). There’s no question about it.” (H/T MMA Fighting)

Relinquishing his light heavyweight crown last August in a bid to make a much-anticipated move to the heavyweight ranks, Jones began a rigorous strength and conditioning programme to prepare for his leap in weight classes, however, has yet to be booked since his February 2020 title defence against recent UFC Vegas 25 headliner, Dominick Reyes.

Recently splitting from long time management representatives, Malki and Ibrahim Kawa from First Round Management, Jones has reportedly been negotiating a deal for a potential championship matchup against Ngannou by himself, with White claiming the Rochester native has pursued a guaranteed purse of $30 million.

Speaking with ESPN MMA reporter, Brett Okamoto recently, White noted that the promotion is likely to book a rematch of Ngannou and Lewis, however, claimed that a pairing of former promotional champions, Miocic and Jones isn’t out of the realm of possibility.