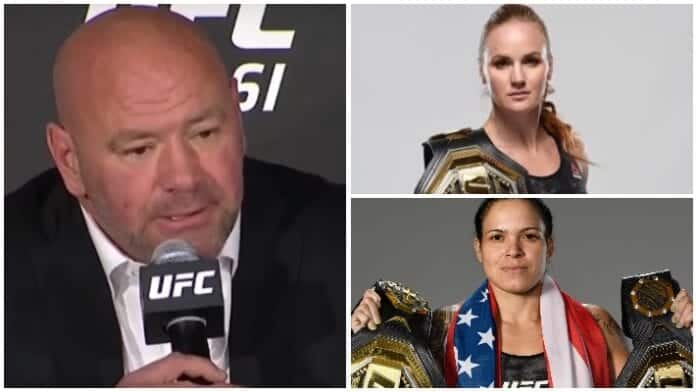 Dana White has spoken; he will not book a trilogy fight between the two most dominant UFC women’s champions anytime soon. That is, of course, unless both champions want it.

Shevchenko (21-3 MMA, 10-2 UFC) put on a dominant performance at UFC 261. She earned a first-round stoppage former strawweight champion, Jessica Andrade (21-9 MMA, 12-7 UFC). In the wake of her domination of Andrade, the media asked White about a trilogy between the two champions. (H/T MMA Junkie)

“(They should have) their own legacies. They fought a couple times. People can think whatever they want. There’s always going to be somebody else coming up (to challenge Shevchenko). There’s always a new contender. And it’s not Valentina’s fault that she’s one of the all-time baddest women on this planet. So making her move up to 135 pounds just doesn’t make sense when she did it twice.”

However, White went on to share that the trilogy isn’t entirely out of the realm of possibility. “If they both come to me and they both want to do it, then whatever – I’ll make it happen. But it’s not something I’m thinking about.”

If Nunes is interested, it’s not the focus of her attention at this time. She’s preparing to defend her bantamweight title against Julianna Peña at UFC 265, after back-to-back defenses of her featherweight belt.

Nunes also holds wins over Shevchenko in both of their previous fights.

While Shevchenko would like to, admittedly, exact her revenge, she’s in no rush to do it anytime soon.

“When it’s time to happen, it’s going to be something big and huge – and I’ll be ready for it. I’m already for it – but I’ll be sure to gain some pounds back.”

Should the UFC schedule the Nunes-Shevchenko trilogy in 2021?