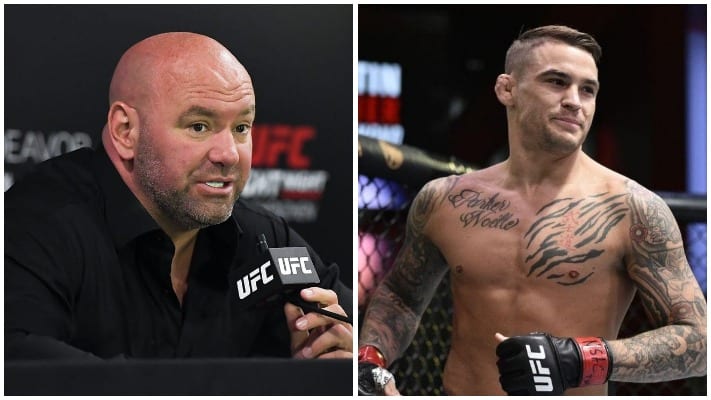 ‘The Diamond’ was expected to square off against Ferguson in an eagerly anticipated co-main event on October 24. However, the fight fell apart late last week as the UFC refused to meet Poirier’s financial demands for the fight.

Speaking to media at the DWCS 33 post-fight press conference on Tuesday White suggested Poirier didn’t want to fight Ferguson and therefore priced himself out during negotiations, he said.

“Listen, there’s a lot of different ways to turn down a fight. Negotiating yourself out of one is one of the ways you can do it. So for whatever reason, he didn’t want to take this fight. Only he knows that.”

Poirier was quick to deny those claims from White and reiterated his desire to fight Ferguson.

“I do want that fight,” Poirier wrote via text message to MMA Junkie. “Simple and plain, I want to fight Tony. I like the matchup.”

The UFC boss doesn’t seem to want to make the fight anymore. He told reporters yesterday that another opponent is currently on the table for Ferguson at UFC 254 and he sees no reason why El Cuccy wouldn’t be accepting it.

“I told you we’ve got a fight,” White said. “I don’t see Tony not accepting the fight.” (Transcribed by MMA Junkie)

Do you agree with UFC president Dana White? Is Dustin ‘The Diamond’ Poirier ducking a co-main event fight with Tony ‘El Cuccy’ Ferguson at UFC 254?