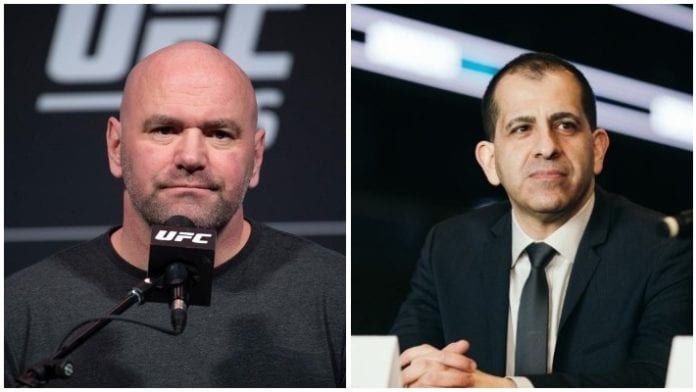 Dana White has slammed Stephen Espinoza for claiming UFC fighters would be fined for talking negatively about his COVID-19 protocols.

Speaking to his Twitter followers Showtime executive Espinoza claimed UFC 249 fighters would lose their purse and bonuses for talking negatively about the coronavirus testing in place at the event, he wrote.

“It’s because they were required to sign a document which says that they can lose their whole purse and bonuses if they say anything negative about the COVID protocols.”

Yahoo Sports later confirmed Espinoza’s claim that a clause in fighters contracts could see them face financial penalties for speaking out against the UFC COVID-19 protocols, it reads. “The Company may revoke all or any part of any prize monies or awards won by the Participant in connection with the Activities, including, but not limited to, purses, win bonuses, other fight-related bonuses and event-based merchandise royalties.”

White says all his fighter contracts have disparagement clauses in them but this doesn’t prevent a fighter from talking bad about the COVID-19 procedure, only from lying about it, he explained.

Do you think Dana White is right to include disparagement clauses in all of his fighter contracts?