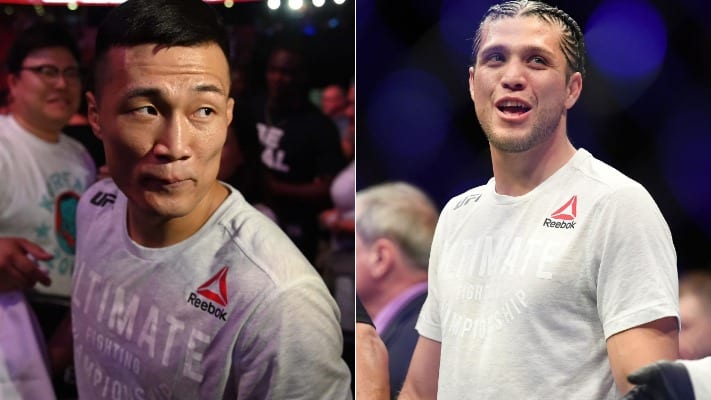 On the whole, UFC 248 was a successful night with great action, and there was even more action in the crowd. According to UFC president Dana White, Brian Ortega and Korean Zombie had a physical confrontation during the event.

“”Dana White says Brian Ortega and The Korean Zombie got into a fight in the crowd during #UFC248.””

Ortega and Zombie were initially scheduled to fight each other at UFC Busan back in December with things being cordial between the two. However, Ortega had to pull out due to injury and things later became hostile when Zombie claimed “T-City” was ducking him.

“When I saw him in Korea he apologized and said sorry for the trash talk and I said all good because at least you came at me like a man,” Ortega wrote. “Now you just a b*tch dawg. Jay Park welcome to the fight game don’t be surprised if I slap the sh*t out of you when I see you. Having an injury and ducking are 2 different things.”

Ortega proceeded to do just that as he also slapped Park — Zombie’s translator — according to ESPN’s Ariel Helwani.

“”Korean music artist Jay Park, who served as Chan Sung Jung’s translator during his recent appearance on the show, was slapped by Brian Ortega during tonight’s event, Park tells me. A scuffle ensued and then broken up. Ortega took issue with Park’s translation on the show.”

Maybe this will end up leading to highly-anticipated bout between the two featherweight contenders.

What do you make of Ortega and Zombie fighting in the crowd?