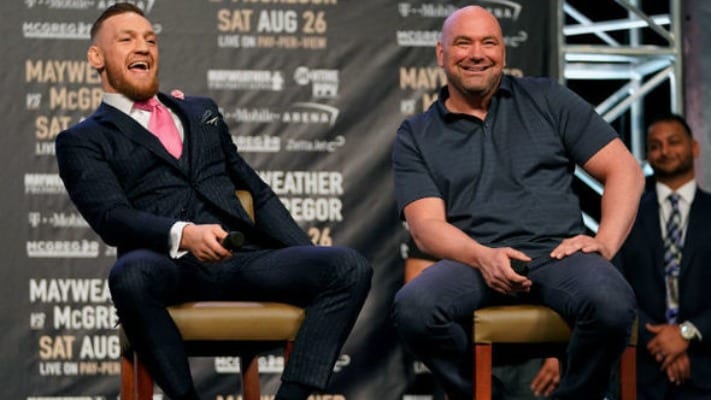 Dana White isn’t worried about Conor McGregor after his run-in with Machine Gun Kelly at the VMA’s on Sunday.

The UFC’s biggest start got into a physical altercation with the recording artist. It was originally reported that the confrontation was triggered by MGK refusing to take a picture with McGregor. Later, it was suggested that the former dual-weight UFC champion had been slipping into the DMs of Kelly’s girlfriend, Megan Fox.

Whatever the reason for McGregor and Kelly’s beef, it now appears to have been squared. The UFC president recently revealed to media that he had spoken to both men and it was all just one big misunderstanding.

“I talked to both. actually,” White said following Tuesday’s Dana White’s Contender Series 39 event. “They’re all good now. (It was) A misunderstanding, or whatever it was.”

“Guys, this is the fight business,” White said. “I got 700 lunatics under contract here. What do you guys think – these are the things that happen sometimes. This isn’t Microsoft. We’re in a crazy f*ckin’ business here.

“There’s all the sh*t that you guys know about because it happens in public,” White added. “Nevermind the sh*t you don’t know about that happens every day.” (Transcribed by MMA Junkie)

McGregor is currently in recovery after suffering a nasty leg break just one round into his third fight with Dustin Poirier at UFC 264. The Irishman recently revealed he feels ready to start kicking again but has been advised by medical professionals to wait a bit longer. ‘Notorious’ is expected to make his eagerly anticipated return to the Octagon in the summer of next year.

Do you think Dana White should be concerned about Conor McGregor’s recent behaviour?