LowKickMMA.com
Home UFC News ‘I’m on Dana White’s side too’: Nate Diaz opens up on future... 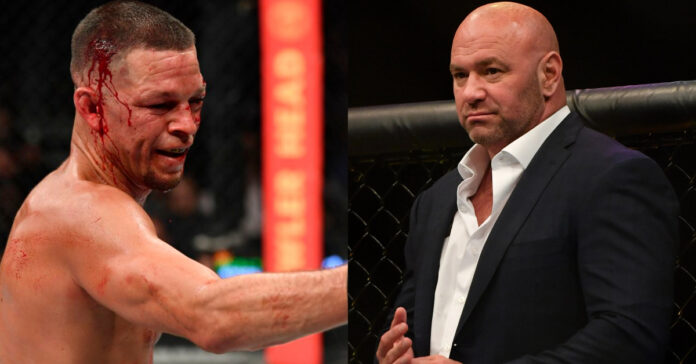 Nate Diaz is not certain what his future holds after the last fight on his contract.

Fan favorite Diaz is set to complete the last outing on his current deal with the UFC when he takes on Khamzat Chimaev in the headlining contest of UFC 279 on Sep. 10 at T-Mobile Arena in Las Vegas, Nevada. Ahead of the highly-anticipated clash between the rising prospect and the grizzled veteran, Diaz opened his own fight promotion company called, ‘Real Fight Inc.’

In an interview with Brett Okamoto for ESPN MMA, Nate Diaz shared his thoughts on his bitter feud with the promotion. While he does understand the opportunity to ruin UFC’s plans with a victory over the undefeated “Borz,” he claimed he does not have his future planned out and did not start his own organization to piss off UFC president Dana White.

“Yeah, I get it. If I f**king ruin it, haha, that’s what you get. You’ve been playing with me for too long. I’m on Dana White’s side too, it’s all good. I understand business. It’s all good with me. Me and Dana always got along with everything too. I’m not launching Real Fight Inc. because I’m against anybody. I’m not going anywhere doing anything. I have no plans for what my next move is.”

Diaz says the best fighters are in the UFC

Diaz believes that the promotion hosts the most elite competition in mixed martial arts and he expects them to continue doing so. However, he had a major selling point for his own company.

“Regardless of what happens though, say I leave or do whatever, the best fighters are in the UFC, and have been for a long time, and will be for a long time I’m sure. That doesn’t mean the realest sh*t is happening in the UFC but no matter what I do, I’m going to be in the UFC.”

What do you make of the recent comments from Nate Diaz?