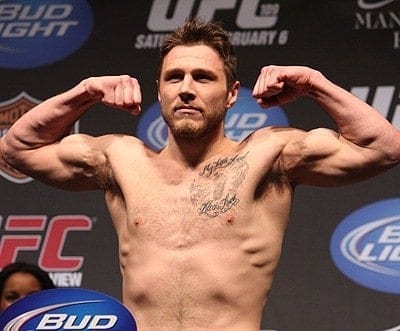 After 21 months away from the cage, longtime UFC vet Dan Miller will finally return to fighting.

Today the UFC officially announced that Miller, who fought his last two UFC bouts at welterweight, will return to middleweight in order to face The Ultimate Fighter (TUF) Brazil alum Daniel Sarafian at UFC Fight Night 58 on December 20.

The rollercoaster prompted Miller to try his hand at welterweight, and he made his 170-pound debut by submitting Ricardo Funch at UFC on FX 4 in June 2012. Miller then faced and was finished by talented welterweight prospect Jordan Mein at UFC 158, the first stoppage loss of his lengthy MMA career.

Miller has fought very sparingly over the past couple of years while he and his wife have been unfortunately dealing with their son’s health complications. Miller was forced out a scheduled bout with John Benoist in 2012 when he discovered news about a kidney transplant for his son. Miller and his wife also lost their first child in 2009.

Similar to Miller, Sarafian tried his hand at welterweight this year, dropping his 170-pound debut to Kiichi Kunimoto at June’s UFC 174 from Vancouver. The Brazilian slugger has lost two straight and three out of his four UFC bouts.

With both fighters back at their original weight class, the bout should present an interesting battle between two fighters who have a lot to prove, albeit for different reasons.

The event also features the return of bantamweight champion Renan Barao, who recently signed on to square off with Mitch Gagnon in the co-main event.