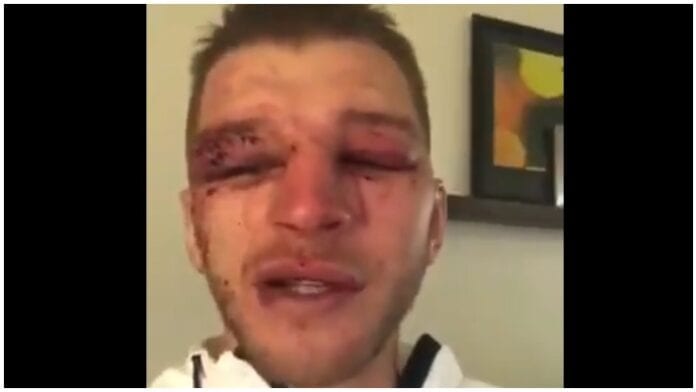 Lightweight contender Dan Hooker has reacted for the first time since falling short against Dustin Poirier in a contender for fight of the year at UFC Vegas 4.

Hooker and Poirier went to war for five rounds in the main event of the evening. Both men had their moments but ultimately ‘The Diamond’ was able to win the fight down the stretch and earn a unanimous decision on the judge’s scorecards.

Post-fight both Hooker and Poirier were transported to the hospital and therefore unable to conduct interviews with the media. Once he’d been checked out the New Zealander took to social media to update his fans on his condition, he said.

“Hey everyone! (I’m) just back at the hotel with the lads having a feed. (I) got checked out of hospital, everything is all good. Just a couple stitches on the eye but hey, that’s the game we play. No worries it’s just a small set back and I’ll be back.”

Alongside the video he wrote a message giving props to Poirier on the win and called the fight just a minor setback.

“Quick message for the people that support me. Credit to Poirier better man on the night, no regrets, no excuses. Minor setbacks ain’t a major for me. 😉 #teamhangman #rideordieonly,” Hooker wrote.

This defeat snaps a three-fight winning run for Hooker who had previously beat James Vick, Al Iaquinta and Paul Felder to earn his shot at the former interim lightweight champion. Poirier fought last night for the first time in nine months. He previously lost against lightweight king Khabib Nurmagomedov. ‘The Diamond’ looked spectacular as he got back to winning ways in Las Vegas.

Do you think Dan ‘Hangman’ Hooker can still be a UFC champion after his UFC Vegas 4 main event loss to Dustin Poirier?