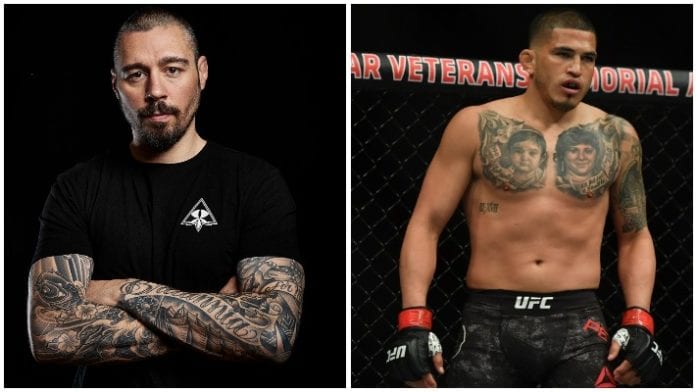 Former welterweight title challenger Dan Hardy was not impressed with how Anthony Pettis performed against Donald Cerrone at UFC 249.

Hardy has been talking up a potential fight with Pettis for some time now and was quick to react to his sub-par display against ‘Cowboy’. ‘Showtime’ scored a unanimous decision win against Cerrone in the featured preliminary fight on Saturday night. However, many observers think the fight could have gone the other way and Hardy is one of them.

Speaking to BT Sport immediately after the event Hardy expressed his belief Cerrone should have been declared the winner against Pettis, he said.

“I think it’s a good scrap, I don’t think he won the fight tonight, I think ‘Cowboy’ took the first and second round. And did get poked in the eye in the third round and was unlucky on the decision. I think ‘Cowboy’ looks better at welterweight.

The Brit them proceeded to break down Pettis who he says is struggling to adapt as his reflexes slow down with age, Hardy explained.

“Pettis just doesn’t look as quick or as agile as he used to in his career. I don’t even think it’s about the weight class anymore. I even think if you moved Pettis back down to 155, he’s not quite as sharp as he used to be. It’s a bit like Roy Jones when you’ve got a style relies on reaction time and speed and that starts to drop off it becomes evident very quickly.”

Nonetheless Hardy seemed very much interested in fighting Pettis and also very confident he’d be able to score a highlight-reel KO against ‘Showtime’, he said.

“The suns coming up here. I’m going to get my running shoes on now and get out on the road. I think I’d catch him clean and put him away, to be honest.”

Do you think Dan Hardy could knock out Anthony Pettis?