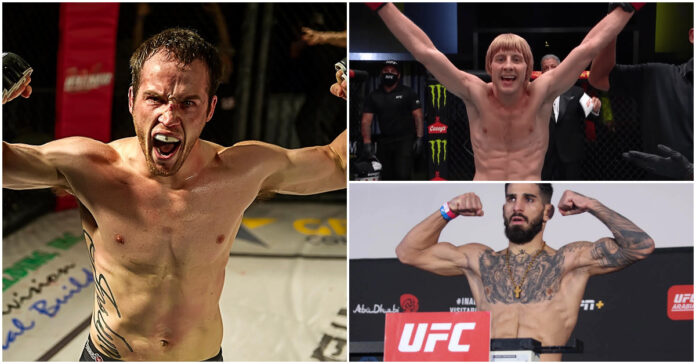 UFC featherweight Damon Jackson believes Ilia Topuria to be a rising superstar and has backed him to win over Paddy Pimblett.

Having had multiple canceled bouts and replaced opponents, ‘The Leech’ shared his thoughts on the shift in the mindset of competitors nowadays. Jackson is currently on a two-fight win streak with a prior loss to Ilia Topuria in 2020. The 33-year-old spoke about how well-rounded Topuria is and how he was caught in the first round to get knocked out.

In an exclusive interview with LowKick MMA, Damon Jackson talked about his upcoming fight against Darrick Minner at UFC Fight Night 207. He was asked about a potential matchup between Topuria and another one of the hottest prospects in the game, Paddy Pimblett. As someone who’s faced ‘El Matador’ Jackson attested to his abilities and favors him to win over Pimblett.

“Ilia 100 percent. Paddy is kinda trash, honestly,” Jackson said. “I think that they’re going to have to feed him some nobodies for him to keep building his name up. I think he’s entertaining because of his personality but his skill level is not impressive. It is jiu-jitsu, it’s probably the best thing he has going for him and then his just mindset. His attitude of like, ‘f**k you, I’m going to fight’ and that’s great.”

Jackson made it clear he wishes Pimblett the best and hopes he gets better with time.

“I hope it goes good for him and I hope he gets better. I hope he really sees that early without having to take those big losses because it’s not easy to tell yourself that you’re not that good, this part. So you gotta really work. Hopefully, he zones in and gets better over this time.”

As fun as it is to discuss potential fights, Pimblett vs. Topuria is one that we may likely never see play out in real life. Damon Jackson does not believe the UFC will risk losing out on one of their bigger names just yet. He compared Pimblett’s journey in the promotion to that of Sean O’Malley who’s become infamous for fighting lower-ranked opponents.

He reckons the UFC will give Pimblett the ‘Sean O’Malley treatment’.

Jackson will be looking to extend his win streak to three when he takes on Minner this June 4 at UFC Fight Night 207.