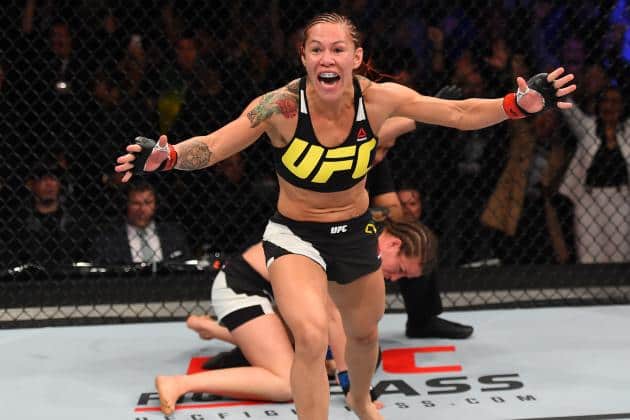 Earlier this year, the UFC introduced a women’s featherweight division to its promotion. Bantamweight contenders Holly Holm and Germaine de Randamie moved up in weight to compete for the inaugural 145-pound title, with de Randamie scoring a somewhat controversial decision victory over Holm in the main event of UFC 208 from Brooklyn, New York.

The only problem, however, is that the division has not moved forward sense, as GDR hasn’t fought, while Cris Cyborg, the woman many consider to be the best featherweight in the world has been on the sidelines as well.

Cyborg, however, appears ready to compete, although de Randamie has been rumored to be dealing with personal issues. With that being said, the Brazilian slugger has urged the UFC to book her in a bout with Megan Anderson:

Ran into @MeganA_mma in #lasvegas and she told me #anytime #anywhere @seanshelby people want to see me fight a REAL 145lber in the @ufc pic.twitter.com/dmO3DUl5y5

Anderson is a highly accomplished featherweight contender, having won her previous four bouts under the Invicta FC banner, with all four of those victories coming by way of stoppage. The Australian has yet to compete inside the Octagon.

There have also been rumors indicating that Cyborg could take on former bantamweight title challenger Cat Zingano in her next bout, which she would like to take place at July 29’s UFC 214. That possibility doesn’t appear to interest her at all:

Make world rankings matter! #1 vs #3 in the world at FW don’t make #1 vs someone from a lighter weight class coming off consecutive losses https://t.co/UsXR08asOd

Who would you like to see Cyborg take on next and what should be done with the struggling featherweight division?