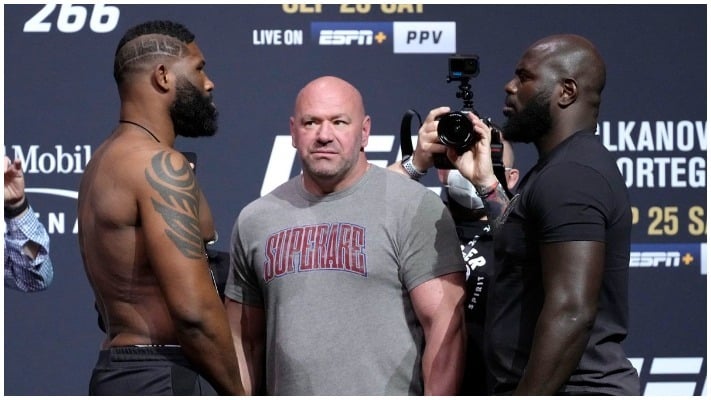 Next up, we have a heavyweight matchup between Jairzinho Rozenstruik and Curtis Blaydes.

Rozenstruik is coming off a fantastic knockout over Augusto Sakai. The only two losses of his career are from Francis Ngannu and Ciryl Gane. On the other side, Curtis Blaydes is coming off a devastating KO loss on behalf of a Derrick Lewis uppercut.

Round 2: The two fighters start in the middle again. Rozenstruik hits a left-right combo on Blaydes. Blaydes continues to work the jab. Boos rain down as the two eyes each other up in the middle of the octagon. Blaydes lands a leg kick and Rozenstruik answers back with a left. Blaydes hit a left straight that gets Rozenstruik attention a bit. There is mutual respect from the two fighters as they are tentative to push too fast in fear of getting caught. Rozenstruik lands a huge flying knee with a left hand behind it. Blaydes scores a takedown to retaliate and passes into half guard. Blaydes hits Rozenstruik with a few body shots while his forearm is driven into Rozenstruik’s neck. Blaydes finishes the round in half guard. Blaydes eye is swollen completely shut from the knee.

Round 3: The third round starts off with another stalemate of mutual respect. Both fighters are working their jab. Blaydes from southpaw Rozenstruik from an orthodox stance. Blaydes hits a nice counter left hook after Rozenstruik tried a right hook and missed. Blaydes continues to work the leg kick and scores another takedown. Blaydes is working landing strikes from the full guard of Rozenstruik. Rozenstruik had a quick second to get up but didn’t take advantage. Blaydes advances to half guard. Blaydes then lands a few short left elbows on the side of Rozenstruik’s head. Blaydes has over 5 minutes of control time with 1 minute left to go in the round. Blaydes continues to work in the half guard and the horn sounds.