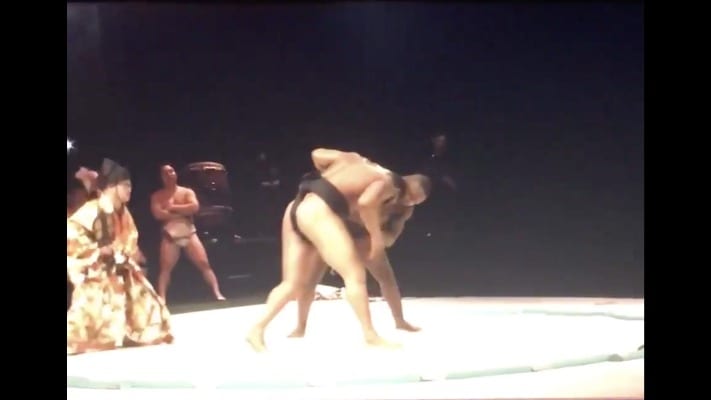 UFC stars Curtis Blaydes and Anthony “Rumble” Johnson decided to take part in a “Celebrity Sumo Round Robin” this week.

The action went down at a SubStars grappling event yesterday (Fri. February 21, 2020) in Miami, Florida. Blaydes and Johnson took on sumo stars Ryuichi Yamamoto and Takeshi Amitani, respectively. Then, the pair squared off against each other. Blaydes first took on 210-pound sumo champion Amitani. Despite Blaydes having the size advantage, Amitani quickly dragged the UFC heavyweight to the ground, finishing the match with a hip toss.

Then, Johnson faced who many believe is the largest Japanese-born sumo wrestler in the world in Yamamoto, who weighs 600 pounds. Yamamoto lifted up Johnson with ease and eventually threw him out of the circle.

Lastly, Johnson and Blaydes squared off against each other. In the first round, Johnson quickly dragged Blaydes down, but then “Razor” was able to stay on his feet by using his hand on the mat.

The second round saw Blaydes use Johnson’s forward momentum against him to drag him out of the ring and tie up the score at one to one. In the third and final round, Blaydes used an inside trip to get “Rumble” down and win the match.

In regards to mixed martial arts (MMA), Blaydes is on a three-fight win streak inside the Octagon and is making a case for a shot at the heavyweight title. Johnson, on the other hand, who has been retired since 2017, is anticipating a return later this year. However, this time, the former light heavyweight title challenger will be doing his work at heavyweight.

What do you think about Blaydes topping Johnson in sumo wrestling competition?