LowKickMMA.com
Home UFC News Cung Le: I’m Going To Represent All The Fighters That Are Scared... 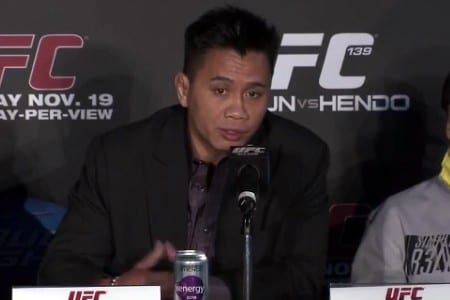 UFC middleweight Cung Le hasn’t exactly fallen under the good graces of his employer as of late. The talented striker failed a post-fight drug test for human growth hormone (hGh) after his UFC Fight Night 49 loss to Michael Bisping (although his suspension was later overturned due to inconclusive results) before asking for his release from the promotion.

But today (Tues., December 16, 2014), Le is taking his discord with the UFC to an all-new level after he was named as one of the main plaintiffs in the absolutely massive antitrust lawsuit filed against the UFC. He was the only current UFC fighter to be involved in the class action lawsuit.

Le told ESPN’s Outside The Lines that after using their power to curb the free market, the UFC will be forced to relinquish control of fighters’ careers:

“They [the UFC] control our likeness. They control our career and that’s a choice we as fighters should have. And we don’t have that choice. I’m going to represent all the fighters that are scared to take a step up.”

An admirable goal from Le, who will be aided in his cause by longtime antitrust lawyer Rob Maysey, among many others. Detailing his long-held beliefs that the UFC was imploring “restrictive” labor practices, Maysey said that he warned them to change before a suit such as this came up:

“I called [the UFC] in 2006 and said ‘You have a choice.’ I said, ‘You guys are going to recognize a fighters’ association or you’re going to face an antitrust case.”

Maysey went on to proclaim that the UFC has created a monopoly of sorts, one that shut down competition and raked in all the profits for themselves:

“They [The UFC] have become the only game in town and locked down the entire sport. …  At its heart, this lawsuit is about fundamental fairness. The world-class athletes that comprise the UFC are making enormous sacrifices and taking huge risks. It is a basic right that these athletes enjoy the fruits of their labors.

The antitrust laws of the United States were designed to prevent any company from dominating a market, artificially stifling competition and hoarding super-competitive profits. That is exactly what happened here.”

Maysey is clearly focused on the fair treatment of fighters, and Benjamin Brown, another lawyer from one of the five firms representing the athletes, put in simply when he said competitors who put their well-being on the line (like boxers do as well) deserve to be fairly compensated for doing so:

“All UFC fighters are paid a mere fraction of what they would make in a competitive market.

Rather than earning paydays comparable to boxers — a sport with many natural parallels — MMA fighters go substantially under-compensated despite the punishing nature of their profession.”

Former UFC middleweight Nate Quarry, who has long been a staunch critic of the UFC’s business practices, offered his belief that the fighters involved are ready for a long battle, and it’sone that they’re confident they can win:

“We’re prepared for a very long and tumultuous fight. We have confidence we’re in the right.”

So the UFC is in for a dogfight of a different kind, one that could take several years and millions of dollars to sort out. Their business practices have fallen under much scrutiny lately, but never to this magnitude.

Will this be the game-changing revolution that fighters have been waiting patiently for, or will the UFC’s seemingly endless bankroll put an end to this uprising and allow them to hold on to their iron grip of the MMA market?