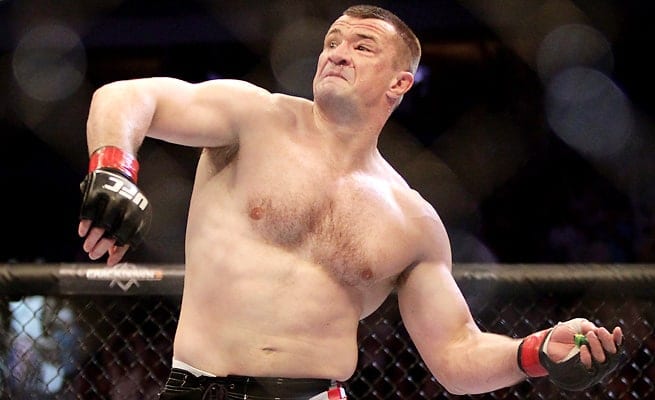 Word recently arrived that Cro Cop will face ‘Big Country’ at Bellator 200 in a rematch of their UFC 137 meeting where Nelson won via third-round TKO.

Cro Cop, who is riding an eight-fight winning streak, retired when he was provisionally suspended for failing a USADA drug test in 2015. The Pride great announced a short-lived retirement and admitted he had used human growth hormone to repair a shoulder injury. However, he continued fighting in Japan, which is known for incredibly lax drug testing, and even won the 2016 Rizin FF Openweight Grand Prix.

To get some hype building for the potential slugfest, Nelson recently called out the 43-year-old Filipovic for using some ‘special supplements’ during his late-career resurgence. Cro Cop took offense, posting a seething reply on his Facebook page in response to the “fat and disrespectful” Nelson’s trash talk:

“Dear Roy Nelson,you dont have to worry that i’m using any ‘special supplements’ as you claim.the only ‘special supplements’ i’m using is 2 hard and bloody trainings per day,five days a week.and i will be tested,like all others, during preparations for the fight and before and right after the fight.so you can be calm.and start thinking of some good excuse after i beat up your fat disrespectful ass,you have enough time to may 25.and do me a favour please,and shave that disgusting beard, look like professional fighter and show respect to your opponent.good luck!”

Cro Cop last competed against Tsuyoshi Kohsaka at December 31’s Rizin World Grand-Prix 2017, knocking him out in the opening round.

Nelson, on the other hand, lost a somewhat controversial majority decision to Matt Mitrione at February’s Bellator 194, knocking him out of the Bellator heavyweight grand prix and opening up his schedule to face Cro Cop in his promotional debut.

For what it’s worth, Filipovic’s only issue with PEDs was the 2015 failure where he said he had informed the UFC what he was taking in the early days of their anti-doping partnership with USADA. That could be fueling his backlash at ‘Big Country’ in an effort to get some buzz generated.

With ratings in a never-before-seen slump for Bellator, they could use just that.