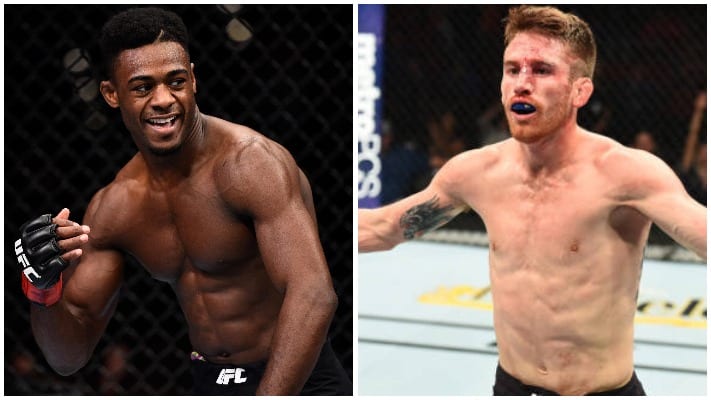 Cory Sandhagen doesn’t believe Aljamain Sterling should be stripped of his title.

While many fans think bantamweight champion Aljamain Sterling should be stripped of his title for pulling out of his UFC 267 rematch with former champion Petr Yan, No. 3 ranked title challenger Cory Sandhagen doesn’t believe he should be stripped.

Sterling controversially won the title earlier this year when Yan illegally kneed when he was grounded. Sterling could not continue, and Yan was disqualified, rewarding the title to Sterling. He became the first fighter in UFC history to win a championship by disqualification.

After the fight, Sterling started to troll the fans a little bit, causing him to get backlash. Instead of an immediate rematch, Sterling opted for neck surgery, something that he had pushed back.

In July, it was announced that Sterling would rematch Yan at UFC 267 on ‘Fight Island’ only six months after his next surgery, which is a very quick turnaround. However, last week it was revealed that Sterling had pulled out of the fight because the UFC officials would not clear him.

Sandhagen, who is coming off a main event loss to former bantamweight champion TJ Dillashaw got the call to fight Yan for an interim title because Dillashaw is recovering from a knee injury, and No. 4 contender Rob Font was already booked against Jose Aldo.

In an interview with MMA Fighting on Monday, Sandhagen was asked if Sterling should be stripped.

“No, not really, man. With the way that it went, you know, I think that would be-it depends on how long he really has to be out for. I think it would be kind of a bad way to strip someone,” Sandhagen said. “For one, he got a really flagrant foul on him in his last fight. Also, man, the guy is actually injured. The guy had actual neck surgery, so I don’t think you should strip someone for getting flagrantly fouled or for having a legit injury.”

“Unless it is going to be a long time,” he added.

When journalist Ariel Helwani said Sterling should be given a year to defend, Sandgagen rebutted and said nine months.

Do you think Aljamain Sterling should be stripped? If not, how long should he get? Let us know!