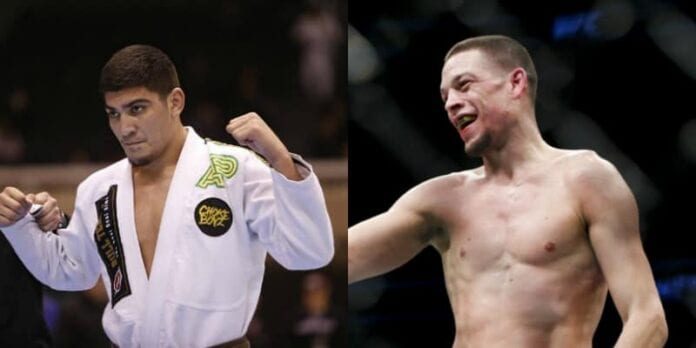 UFC featherweight champion Conor McGregor got his revenge on bitter rival Nate Diaz this past weekend (August 20, 2016) in Las Vegas, scoring a majority decision victory over the Stockton native in the main event of UFC 202. After shockingly being submitted by Diaz last March, McGregor had made it clear that he had made adjustments within his training camp. One of his most notable adjustments was bringing in high level Brazilian jiu-jitsu player Dillon Danis.

After the event on Saturday night, Diaz actually called out Danis for some reason, saying that the grappler was on his ‘hit list’. Danis responded on today’s (August 22, 2016) edition of The MMA Hour, saying that he’d be open to an MMA fight with Diaz:

Danis admitted that he previously had respect for Diaz, but the Stockton Bad Boy has since made it personal. The BJJ black belt once again said that he’d fight Diaz ‘tomorrow’:

“Any kind of combat he wants to do, I’m ready to step in there with him,” Danis said. “Whatever he wants. No problem. MMA? It doesn’t matter to me. I’ll fight him in MMA tomorrow.”

Danis has yet to compete in an MMA fight to date.