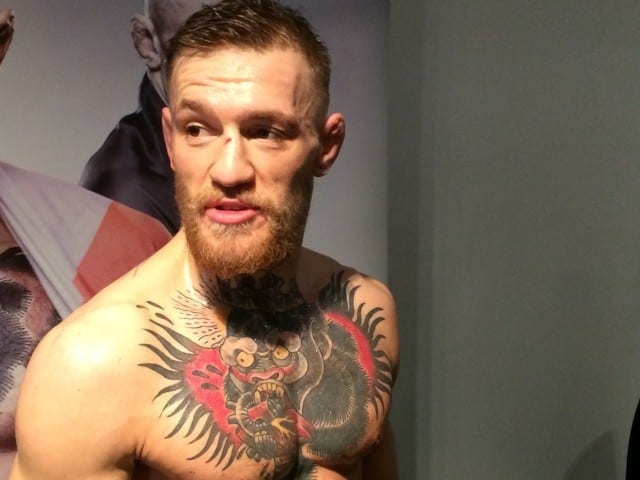 UFC interim featherweight champion Conor McGregor has perhaps never been on such sharp form as he was during a media luncheon yesterday afternoon. After months of hype surrounding his battle with Jose Aldo was brought to a halt by injury to the Brazilian boss, ‘The Notorious’ dispatched Chad Mendes with a TKO and went right back to blasting ‘Scarface’ in the media.

Back to the case in point, McGregor put the entire featherweight and lightweight division on blast yesterday, as well as Georges St-Pierre, Anderson Silva and Floyd Mayweather. So much so, that we’ve got a second article with some more hilarious quotes to offer. MMAFighting.com had the transcript, so prepare your funny bone:

“Before me, there was no main event featherweight fight. No featherweights would fight in the main event unless the world title was at stake,” McGregor said. “And even then, because Jose is a ‘do-nothing b—-‘ as Ronda would say, he fights very little, it was maybe one or two. Now since I burst on the scene, there are eight, nine, 10 featherweight main events.”

“I’m trying to be positive with him,” McGregor said. “They brought him into The Ultimate Fighter gym on the final day. I shook his hand, I’m not trying to scare him. I cannot scare him anymore. I want to cuddle him and tell him that it’s going to be okay. I want to shake his hand and show him its okay. I want to tell him stop being a p—-, it will be over soon and you’ll be back to your normal life with your wife and your kids. Don’t worry, it will be over soon.”

McGregor’s sharp wit and willingness to go all out in the media have made him both a fan favorite among some circles, and public enemy number one to others. The fact remains he is now one of the most marketable faces in all combat sports, and is backing up everything he says in the octagon.

Do you think ‘The Notorious’ has a B-line to ‘Scarface’s’ psyche, or is he simply setting himself up for a monumental fail at UFC 194?