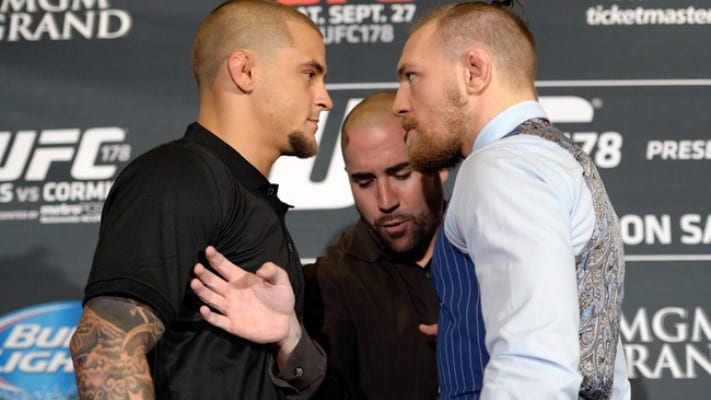 Former dual weight UFC champion Conor McGregor is now officially booked to face off against Dustin Poirier in a highly anticipated rematch according to a new report from MMA Fighting, which reads.

“The long rumored rematch between Conor McGregor and Dustin Poirier is a done deal.

“According to multiple sources speaking to MMA Fighting, both McGregor and Poirier have come to terms on a deal to book the fight for the upcoming UFC 257 card on Jan. 23 with the card expected to take place in Las Vegas.”

“While the fight has been in the works for several weeks, negotiations were still ongoing to strike a deal with the athletes. Late Monday night, it appears all sides have agreed.

“However, according to sources, McGregor would still prefer returning earlier and it appears he’s pushing for the Dec. 12 date now that Nunes vs Anderson has been scrapped for the main event at UFC 256.

Just yesterday the fight was thought to be in jeopardy with Ariel Helwani of ESPN suggesting Poirier had been holding up the fight with the same financial issues that led to him withdrawing from a fight with Tony Ferguson. The veteran MMA reporter also suggested that former interim lightweight champion Justin Gaethje may get the call if negotiations with ‘The Diamond’ drag on much longer.

Thankfully it hasn’t come to that and we now have an epic remach to look forward too. For those who don’t remember McGregor and Poirier previously squared off at UFC 178 in 2014. On that occasion ‘Notorious’ emerged victorious via first round TKO.

Since then the Irishman has gone on to capture UFC titles at featherweight and lightweight. As of late McGregor has not been regularly competing in MMA. The 32-year-old took time out of the sport to pursue a boxing bout with Floyd Mayweather. He has also retired on several occasions, including earlier this year when the UFC failed to get him a fight in a timely manner.

Poirier on the other hand has been very active and in great form too. Since jumping up to lightweight he has enjoyed great success. ‘The Diamond’ managed to capture UFC gold by beating Max Holloway in an interim title fight last year. He failed in his attempt to unfiy against Khabib Nurmagomedov but has since bounced back with an impressive five-round decision win over fellow 155lb contender, Dan Hooker.

Who do you think will win at UFC 257? Conor McGregor or Dustin Poirier?