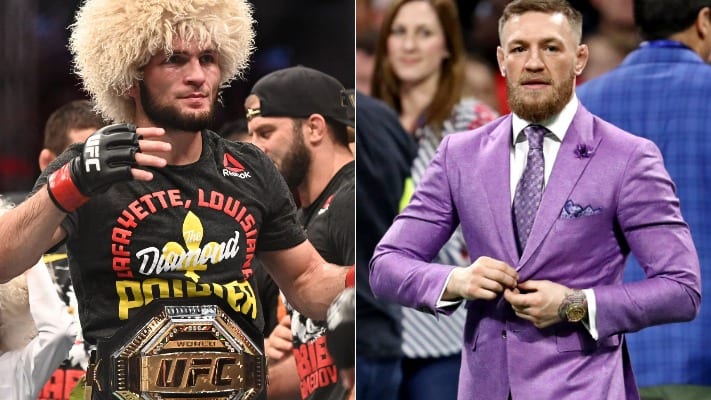 It was a massive day earlier this afternoon (Sat. September 7, 2019) for Khabib Nurmagomedov.

“The Eagle” successfully retained and unified his lightweight title with then-interim champion Dustin Poirier. Khabib dominated the fight for the most part, overcoming a bit of adversity in the second round. After escaping a deep guillotine attempt from Poirier, Nurmagomedov took control on the ground and locked in a rear-naked choke, forcing Poirier to tap out.

Now, Khabib is likely to face Tony Ferguson for his next title defense. However, UFC President Dana White noted, if Ferguson doesn’t accept the fight, a Conor McGregor rematch does make sense. Now, McGregor has offered his reaction to Khabib’s big win in Abu Dhabi. “The Notorious” called for a rematch in Nurmagomedov’s own backyard of Moscow, Russia.

Khabib and McGregor initially fought back in October, where McGregor ended a lengthy layoff to return to the Octagon. Nurmagomedov dominated the fight, submitting the Irishman in the fourth round via neck crank. Now, McGregor is itching to get back to action and hopes to secure an immediate rematch with his Russian foe.

What do you think about a potential rematch between Khabib and McGregor? Who do you think Nurmagomedov will ultimately face next?