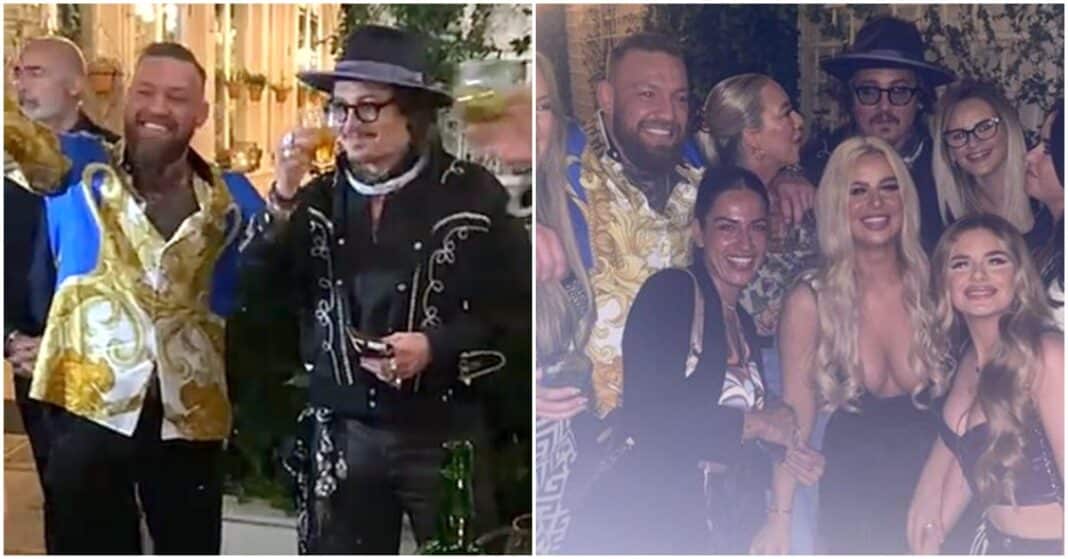 Former two-weight UFC champion, Conor McGregor was pictured partying with Hollywood superstar actor, Johnny Depp in Rome, Italy over the weekend — with the Dubliner offering Depp glasses of his own whiskey, Proper No. Twelve.

Former undisputed UFC featherweight and lightweight titleholder, McGregor is currently on vacation in Rome with his fiancée, Dee Devlin, and his family, where he was recently presented with the key to Vatican City after he and Devlin christened their youngster child, Rían at a ceremony over the weekend.

However, following the ceremony, McGregor is alleged to have been involved in an assault against Italian television personality and DJ, Francesco Facchinetti, whilst partying with the Italian, his wife, Wilma Fiassol, and the aforenoted, Devlin.

Facchinetti alleges that he and McGregor had been partying for several hours at the St. Regis hotel in Rome, before McGregor invited him to another party later that night. After accepting the invitation, Facchinetti claims McGregor assaulted him unprovoked, punching him, resulting in a broken nose and a bloodied lip.

The above mentioned, Fiassol alleged that following the assault on her husband, members of McGregor’s entourage were forced to restrain and corral the 33-year-old and hold him against a wall as he attempted to further assault Facchinetti. At the time of publication, McGregor nor his publicist have yet to respond to the accusations.

A spokesperson from the St. Regis hotel released a statement detailing that they would fully support law enforcement and police if they wished to carry out an investigation in relation to the alleged incident.

“We will offer the police our full support in their investigation,” The statement read. “The safety and security of our guests and employees is always our first priority.“

In pictures posted by McGregor’s niece, Taylor on her social media, McGregor can be seen speaking with the aforenoted, Pirates of the Caribean frontman, Depp as the two take pictures, with the Straight Blast Gym staple asking Depp if he would like a drink; “Do you want some whiskey? Some Proper 12? Here, I’ll get you a glass.“

The former champion is still recovering from a recent surgical procedure to address a fractured tibia suffered in his July first round doctor’s stoppage TKO loss to arch-rival, incoming lightweight title chaser, Dustin Poirier at UFC 264.

Diego Sanchez Details Hospital Battle: ‘No Fight Camp Or Opponent Has Dominated Me Like This’