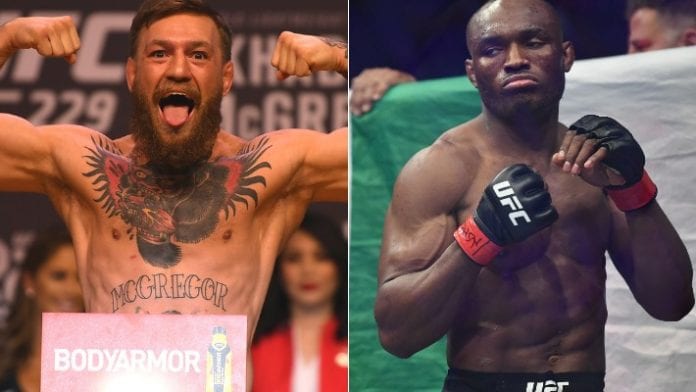 Conor McGregor has been offered the next shot at UFC welterweight champion Kamaru Usman by his manager Ali Abdelaziz. ‘The Nigerian Nightmare’ has been linked to a fight with BMF titleholder and the number one contender at welterweight Jorge Masvidal. The two fighters have been building a rivalry for months, exchanging shots online and nearly coming to blows at Super Bowl weekend earlier this year.

UFC president Dana White has since said he is working on something different for Masvidal besides fighting Usman and many have suspected he could be next in line for a shot at the money man of MMA, Conor McGregor. Although based on his social media activity last night it seems ‘Gamebred’ is more interested in running things back with Nate Diaz. ‘Gamebred’ was reacting to Diaz labelling himself the baddest motherf*cker in the game despite the fact he lost to Masvidal for that honour at UFC 244 last year.

Speaking on Twitter the MMA manager offered McGregor a chance to win a belt in his third UFC weight class after Masvidal began looking elsewhere for a fight. Abdelaziz even claimed Usman wouldn’t look for the takedown for the first couple of rounds in order to sweeten the deal, he wrote

“It looks like #1 contender wants to fight Nate Diaz now . Good for him @TheNotoriousMMA hey you want a title shot ? Come to daddy @USMAN84kg will give you one and he promise first 2 rounds without takedowns only slaps.”

Usman hasn’t fought since making a successful first title defence against Colby Covington late last year. The 33-year-old scored a fifth-round stoppage win in a back and forth war which was undoubtedly one of the best fights 2019 had to offer.

McGregor fought earlier this year for the first time in a while and it was at welterweight. ‘Notorious’ took on MMA veteran Donald ‘Cowboy’ Cerrone and needed only 40 seconds to find the finish and get himself back in the win column.

Do you want to see Conor McGregor fight Kamaru Usman for the welterweight title?