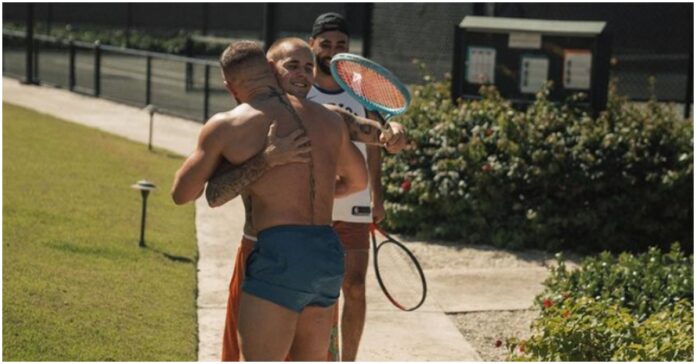 Conor McGregor appeared delighted after bumping into his long-time friend Justin Bieber out in the Bahamas.

The former two-division champion spotted Bieber whilst playing a game of Tennis and couldn’t resist going to catch up with the signer.

‘Notorious’ posted a heartfelt message on his social media following his encounter with Bieber.

‘I always randomly see Justin out of nowhere and just chop it up, I love this kid! Two goats on a cliff sideways, just chopping it up, what’s happenin JB my brotha hahah ❤️ I put it up to the sky this keeps happening, it’s something from above that keeps doing this!’ God bless you my brother, great to see you always. Some serve today! ❤️’

In what is an unlikely pairing, the two became friends after having spent some time together drinking whisky at the Beverly Hills Hotel back in July.

The pair seem to have such a close bond that the Irishman would be seen the following day attending Justin Bieber’s concert alongside his wife and children.

Conor McGregor shared his thoughts via social media whilst at the venue once again showing support to his friend.

‘With my beautiful family at Justin’s “Freedom” concert. Exactly how big Will Wallace woulda wanted us McGregor’s! Free!’

Bieber would also go onto put up a post himself supporting the Irishman saying:

‘Breakfast of champions. @thenotoriousmma @properwhiskey “its about how you get back up [sic].”‘

Conor is clearly enjoying his time away from the octagon and hopefully recovering well. McGregor is expected to be ready to return to the UFC by the summer and there is plenty speculation surrounding who he will be taking on. As Nate Diaz remains without a fight many believe he is being lined up as McGregor’s dance partner for when he makes a return.

Don’t be surprised if Bieber is in full support of his friend when the Irishmen steps back inside the octagon.

Is this a friendship that you expected between Conor McGregor and Justin Bieber?