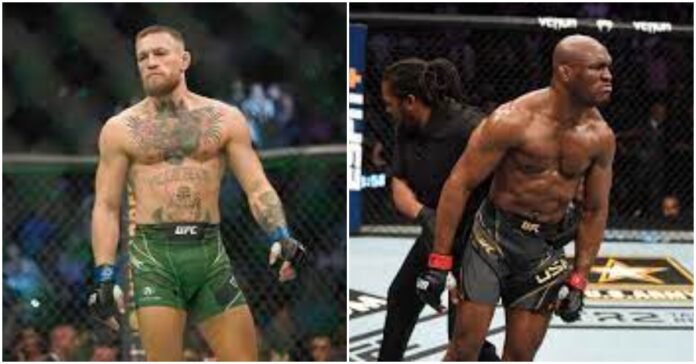 Conor McGregor continues to trash talk any fighter that crosses his path on Twitter, as he responds back to welterweight champion Kamaru Usman’s comments.

McGregor took a shot at Jorge Masvidal for pulling out of his upcoming fight against Leon ‘Rocky’ Edwards. McGregor called ‘Gamebred’ a ‘hoe in a housecoat‘ in his tweet.

McGregor and Masvidal had a little back and forth, but Usman inserted himself into the action and took a shot at McGregor. “You should be quiet. You cry about injuries more than anyone after you get your ass whipped. Foot,Ankle, Shin what else am I missing?” Usman said.

McGregor then took a quick shot back at Usman “Ye you’re missing something bro for sure. Don’t quite know what tho. Originality maybe? I don’t know, something. It’s like, nobody cares. No one cares what the fuck you’re at. And you try so hard too, I just don’t know. Somethings missing for you tho for sure. God bless anyway”

The point went a bit over Usman’s head. McGregor may complain about the injuries he sustains after the fights, but one thing you can’t take away from ‘The Notorious’ is that he goes in and fights with those injuries. He fought Chad Mendes and won the interim featherweight title on a partially torn ACL. McGregor has not dropped out of a fight that was scheduled and is known for taking on opponents on short notice just to stay on the card.

The blatant copying of McGregor’s iconic “red panty night” quote by using “green panty night” is just one of the times Usman has used some McGregor quotes and twisted them around.

‘The Nigerian Nightmare’ is one of the best fighters ever, but his inability to sell a fight is rough at times. He isn’t the best on the microphone and to sell the PPV he needs someone across from him with a big personality. That is why his PPV against Masvidal and Covington were able to sell.

Do you think Kamaru Usman missed the point when sending a shot at Conor McGregor?