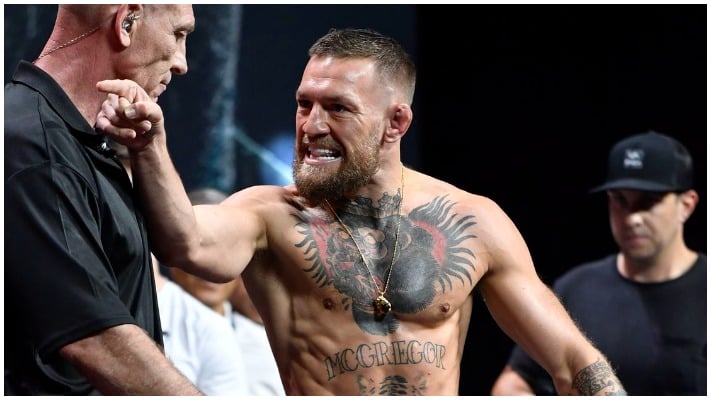 The Irishman has been locked on ‘DC’ for the past few days and has taken several shots at the retired former dual-weight UFC champion on social media.

Cormier finally responded on Wednesday and advised McGregor to focus on the fact he keeps losing rather than beefing with him or anybody else on Twitter.

“I’m not the guy you’ve got to worry about fighting,” Cormier added. “I’m done. I’m retired. I’m living my best life. You need to worry about trying to beat the guys that you fight against. Get off the internet. I don’t hate this dude, but McGregor, fall back.”

McGregor took to social media soon after Cormier’s podcast dropped to take more shots at ‘DC’ referencing his weight and the fact he showed up to a recent UFC press event “drunk”.

“Daniel Cormier is a fat mess. Getting into worse condition by the day,” McGregor wrote on Twitter. “God bless him. Showing up drunk at media events the very day before he was in the booth calling my fight. Drunk at a media event working? The day before being a commentator on the biggest fight in history?”

‘Notorious’ rounded off his Twitter tirade by congratulating Jon Jones on the anniversary of his head kick KO of Cormier before deleting the posts in true ‘Bones’ style.

“@dc_mma your back situations just mental too,” McGregor wrote. “Your weight and way of life is abysmal. And now drunk at work the day before you commentate a McGregor event? Pitiful. Congrats Jon on his head kick KO anniversary over you. Good always defeats evil? Wasn’t sure you were evil. Fakes.”

Cormier was uninterested in continuing the pointless beef with McGregor.

@TheNourtiousMMA we can’t fight, it’s all just talk so stop! Thank you for watching! Get help. Win a fight.,” Cormier replied.

Whose team are you on? Team Conor McGregor or Team Daniel Cormier?