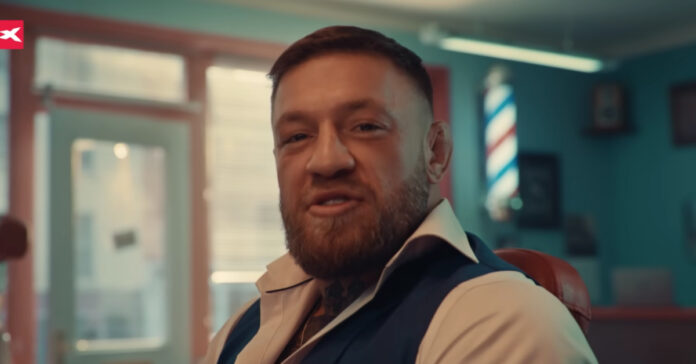 Former two-division UFC champion, Conor McGregor displayed his acting chops as part of a short, 1 minute video for Poland-based cryptocurrency trading brokers, XTB – with the view of becoming an investor.

McGregor, a former undisputed lightweight and featherweight champion under the UFC banner, is currently in the Dominican Republic where he is filming for the upcoming remake of Roadhouse – starring in a lead role alongside Hollywood star, Jake Gyllenhaal.

The 34-year-old has been sidelined from active professional mixed martial arts competition since July of last year at UFC 264, suffering his second consecutive loss in the sport for the first time in his career.

Featuring in a trilogy rubber match against former interim lightweight champion, Dustin Poirier, McGregor fractured his left tibia and fibula in the opening round, resulting in a doctor’s stoppage TKO loss.

Becoming a global brand ambassador for XTB, Conor McGregor and other actors filmed a minute-long video in a Dublin barbershop, with the full feature posted on the broker’s official YouTube channel.

Without a victory since January 2020, McGregor’s most recent win came in the form of a first round knockout win over Donald Cerrone, whom he stopped with a 40-second high kick and strikes finish at the welterweight limit.

Expected to make his Octagon return in the early stages of 2023, Conor McGregor has been linked with potential fights against Michael Chandler, Jorge Masvidal, and Charles Oliveira to name a few, however, at the time of publication, is yet to book his next fight.

McGregor has also recently been linked with a professional and exhibition boxing match against former multiple-weight world boxing champion, Floyd Mayweather next year, with the Grand Rapids native claiming discussions are approaching the final hurdle for a rematch between the two in 2023.