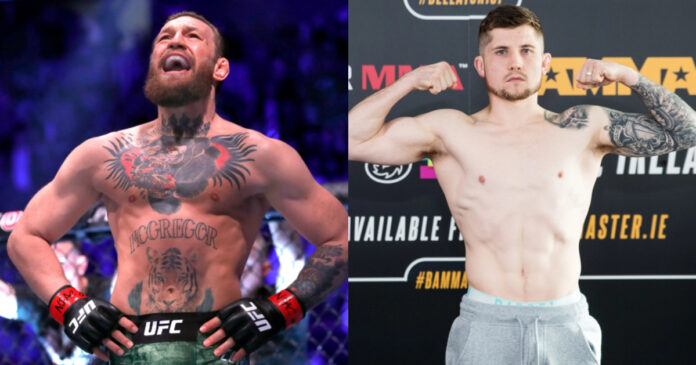 Conor McGregor has called for Brian Moore to receive the next shot at the Bellator bantamweight title in a bizarre Twitter audio post.

Bellator 285 in Dublin was yet another huge moment for the talent-packed Irish MMA scene, with several homegrown fighters earning a victory on Friday night. The Irish would go an incredible 5-1 on the night and several fighters who train out of the famed Dublin-based Straight Blast Gym would also get their hands raised.

One of which was Wexford-born Brain Moore who would fend off Brazilian vet, Arivaldo Lima da Silva earning a unanimous decision. Moore would call out fellow bantamweight, Leandro Higo, but SBG teammate Conor McGregor had a different idea, taking to his Twitter to congratulate Moore before campaigning for ‘The Pikeman’ to fight for the Bellator world title.

“That was how you do it. You get the win. You put in the solid performance, put in the consistency and time… roar the crowd, call the next one, and that’s how you f**king do it, take note. That was the pikeman’s night on Irish soil.“

What’s next for Conor McGregor?

Ever since suffering a gruesome leg break, McGregor has promised a return to the octagon, but still no timeline has been carved out.

The most obvious matchup for McGregor, the Nate Diaz trilogy, now seems very unlikely to take place considering Diaz’s departure from the UFC. Names like Justin Gaethje and Michael Chandler have all been thrown in the mix. However, in reality, it doesn’t matter who McGregor faces, the bout will be exciting and people will still watch.

do you agree with Conor McGregor, should Brain Moore get the next title shot?