UFC 132 was arguably one of the best Mixed Martial Arts cards of 2011, with each fight from top to bottom delivering exciting action for the hardcore and casual fan. Majority of the fights from last Saturday ended decisively without any controversy, but the bout between Dennis Siver and Matt Wiman to many fans was questionable. Thanks to our friends from Compustrike we are able to analyze every strike, every submission, and takedown attempt.

-Matt Wiman attempted 6 takedowns, but only 2 were successful. Siver on the other hand was successful with his one and only attempt.

-Wiman attempted 2 takedowns and was successful with 1.

-Wiman attempted 8 takedowns and was only successful with 2.

Below you can view the full Compustrike totals with all the rounds combined below for Siver vs. Wiman. 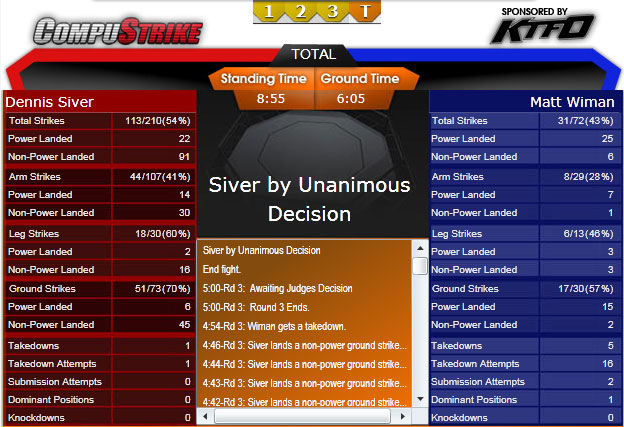 You’ve seen the numbers, you’ve seen the stats. Agree? Disagree? Leave your thoughts about UFC 132 in the comment box. For more MMA stats bookmark and visit Compustrike.com. Here are some more notable stats from last Saturday.

Dong Hyun Kim was only able 2/6 (33%) strikes before getting TKO’ed by Carlos Condit.

All Tito Ortiz needed to do was rock Ryan Bader once to lock up the guillotine choke.

All ten of Chris Leben’s landed strikes were power shots that put away the legend Wanderlei Silva.

The fight between Dominick Cruz and Urijah faber was kept on the feet for 23:45.