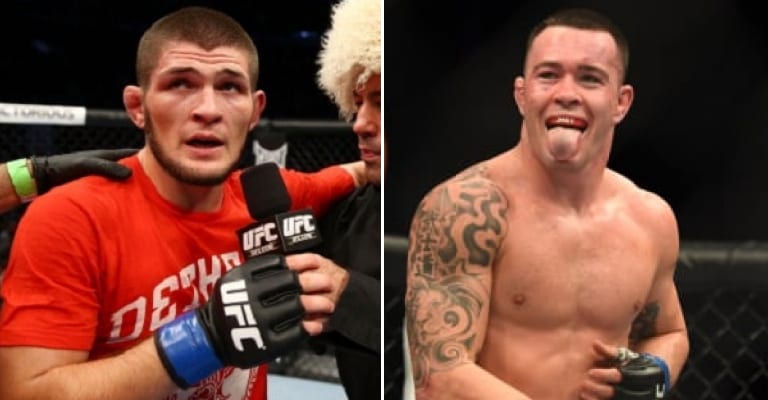 Top-ranked welterweight contender Colby Covington may have his hands full with Rafael dos Anjos heading into their interim title bout at June 9’s UFC 225, but that isn’t stopping him from calling out UFC lightweight champion Khabib Nurmagomedov.

The dominant Dagestani grappler recently defeated last-minute replacement Al Iaquinta to win the lightweight title at April 7’s UFC 223 following a chaotic series of events that saw him potentially matched against five different opponents in six days, but like many watching, Covington wasn’t impressed by ‘The Eagle’s’ victory.

Speaking to MMAjunkie Radio this week, Covington said that Nurmagomedov’s smothering style may work at 155 pounds – where he had had issues making weight – but it wouldn’t work up a class at welterweight.

In his mind, Khabib’s victory over Iaquinta let a lot to be desired, so he thinks Nurmagomedov would get slammed to the mat and be smothered himself in Covington’s now-patented, grotesque fashion:

“I think it works for the little lightweight division, but that (expletive) doesn’t fly at welterweight. You’ve got a real All-American wrestler, not some sambo dude, so if he comes up to welterweight, he’s going to get his head dunked and balls put on his forehead just like the rest of them.

According to Covington’s assessment of the situation after re-watching the fight, Khabib would fail up a weight class because he’s simply too one-dimensional. He views himself as the opposite, despite not being known whatsoever for his striking:

“Guys have a lot more to worry about when they’re fighting me than they do fighting Khabib. He’s just one-dimensional. I’m the most well-rounded fighter on the planet.”

Covington has exactly two TKO stoppages in his 13-win MMA career, with one of them being a submission to punches.

Hardly the record of the ‘most well-rounded’ fighter on the UFC roster, and Covington is still considered one of the most wrestling-focused fighters at 170 pounds. He did outlast Demian Maia on the feet in his last bout, but the Brazilian grappling legend is hardly a fighter relying on knockout power, volume striking, or anything resembling the two.

What we have here, fight fans, is another case of Covington hyping himself with more hyperbole. And based on his next match-up, it’s working for him. Will it come crashing down in Chicago this June?